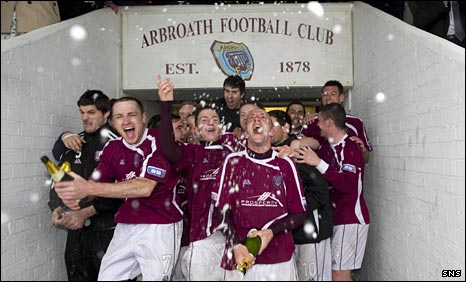 On an wet afternoon that got wetter, the long queues outside Gayfield harked back to an earlier era and required a start delayed by 10 minutes. Ultlimately the 1,243 crowd figure seemed a big underestimate.  there was a sense of occasion, boosted by Irn Bru balls

Flyer and McManus returned to the back line and Chisholm was only the subs bench.  We started positively and pinned Montrose back.   After 5 minutes a good release of Strachan to the corner, he fire ina  great cross and Doris (or Swankie was shoved by a  defender).  Doris netteed the first but, after celebrations was ordered to retake for encroachment and he calmly slotted this one in off the keeper's right post

Montrose were restircted to isolated attacks as Arbroath came forward in waves, with our midfield dominant.  Swankie had a couple of good chances but found the keeper alert and then fired naroolwy over.   We kept going and as haltime approach, a fast breakway after a Montrose corner saw Swakie lift the ball through to Falkingham who slipped it past the oncoming keeper 2-0.  Very satisfying.

Second half saw us regain the iniative yet continue to spurn chances.  Finally, after a clever interchange in and around the box, the ball broke to Sheerin who chipped a delightul ball over the keeper.    With Albion held 1-1 at Queens fans started to believe we could take the title today. the chants of `championeeees' rang around

Although Gibson was replaced by a tenacious Chisholm, a sobering reminder came when Masson volleyed in smartly to reduce our lead.  the last 15 minutes was played on the back foot.  With J Sheerin and McGowan on for Doris and Swankie, we couldn't get hold of the ball as Montrose pressed.

Fulltime saw a joyous of fans (in various states of undress) onto the pitch, reportedly the Mo keeper was knocked over .

The celebrations and the singing  with fans, officals and players finished off an unbelievable day.   Finally we have won something.  Well done for a superb season where - ultimately - our class shone through