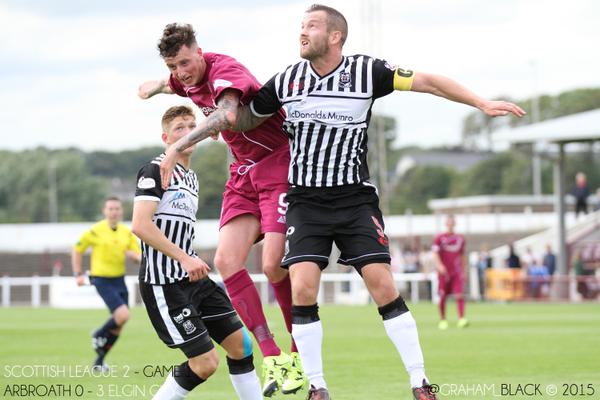 Thanks to Brigsy the badgers report on the Elgin forum (and smokiebaconcrisps for photo):   Elginite, to answer your question, senileoldgoat has rapped it up in one paragraph- we could have at least 5 goals and the Lichties fans were leaving long before the final whistle, because to be honest, apart from some short spells in the first 10 minutes of the first half and just after half time, Arbroath never really troubled a city team who defended resolutely and were excellent in going forward at speed.

If any of you were at the corresponding game at Gayfield last season when Arbroath beat us 1-0, when in reality it should have been 5 in a game they completely dominated, this has been a major turnaround by an Elgin team who dominated the game today, not only in terms of possession (have not seen the stats yet but must be in our favour) but also the organisation of the team and the individual performances and it really shows how much we have progressed.

The reaction of the home fans is always a good indicator of how good the opposition are playing and the Licties fans around me were less than impressed with their team. After all, they are one of the hot favourites for the top position and they were really put to the sword today. One of the stewards said after the game that we were unlikely to get an easier game this season as Arbroath were rubbish, I politely suggested to him that perhaps the reason they were rubbish was because the city made them look poor.

While the loss of a man at the 30 minute mark did not help their cause, their play was sloppy with kicks going into touch or just poor passing that the city defence snuffed out and apart from a couple of saves by our goalie and a goal line clearance by Brian Cameron over the bar in the second half, there was never any real pressure and any shots their forwards did have, generally went wide or over the bar.

There appears to be a general consensus amongst those Elgin fans that I have spoken to, is that in the games that we have played so far (even last week’s defeat at Morton), the city players look a lot fitter and sharper than they were in the first half of last season. In the game today they harried, pressed and ran over the park and as an example, our winger, Marc McKenzie was often back in defence clearing the ball out.

The game itself: An enthusiastic crowd descended on Gayfield for the first meeting of Arbroath FC and Elgin City FC between the two sides in this season’s league encounters.

Within 3 minutes, Arbroath had a corner and from the resulting cross, the ball was sent into the Elgin penalty area three times and on the third occasion Dan Moore took a shot directly on the face which floored him. No sympathy from the Arbroath fans that were in full voice but were soon silenced.

Dan Moore received the ball on the left (city were playing towards the Leisure Centre end), ran the line and sent the ball in, which hit an Arbroath defender and spun up across the penalty area, for Gunny to collect and send the ball into the net past the helpless keeper. (4 minutes).

The anticipated Arbroath onslaught never materialised and the next 10-15 minutes play was generally scrappy by both teams. There was one piece of play by the Licties which saw the ball being sent high into the city penalty area, only for Jamie Duff and Darryl McHardy to collide going for the same ball. I am sure this happened in a game last season as well which resulted then in Darryl going off but no blood today; although I think he was a bit dazed. I suggested last week that we need to get the communication in defence sorted out and this is a case in point.

On the occasions when Arbroath did press, a solid defensive performance by the city’s back four, provided an effective shield for Mark Hurst in the Elgin goal and the Licties danger men, in particular Bobby Linn were kept in check by some excellent tackling.

By the half hour mark, Elgin were two up. The ball was sent up the park to Dan Moore who skipped by a defender and passed the ball to Kyle McLeod who was unceremoniously tripped in the penalty area by the Arbroath number 2, Craig Wilson who was red carded; Gunny stepped up and sent the ball past the helpless keeper in to the net.

In the second half, Arbroath came out the blocks fast but it was the same routine as the first and if you were a city fan, there was just a growing expectation that the longer the game went on, the shock result was on the cards. Shock as least to the Arbroath fans and the bookies!!

Elgin nearly scored a further two goals within the space of 5 minutes as Gunny sent a shot just passed the post and minutes later Kyle McLeod contrived to miss from about five yards when he was straight through.

In 75 minutes, the city did score however when Marc McKenzie ran down the line past a defender and from the byeline, sent a cross into a crowded area which seemed to hit an Arbroath player and out to Mark Nicholson who steadied the ball, before firing an unstoppable shot into the net.

With the game dead and buried the city brought on their three substitutions within 5 minutes of each other with about 10 minutes to go.

Firstly Archie MacPhee replaced Dan Moore who was excellent and back to his previous best before he went to Nairn. He is fitter, sharper and takes on defenders readily before sending in crosses with pinpoint accuracy. Among many excellent performances in the city team, Dan definitely was one of the most outstanding.

George Hunter, on loan from St Johnstone and a prolific scorer for Spartans Under 20s last season came on for Gunny who apart from his 2 goals had another excellent game constantly running and putting pressure on their goalie

Lastly, Robbie Bruce came on for Marc McKenzie who ran tirelessly and made some excellent runs down the line, one of which led to Twiggy’s goal.

Man of the Match: very difficult as everyone played an enormous part in this memorable victory.

As suggested above, Dan Moore is back to his best and was instrumental in keeping the Arbroath backs very busy.

Kyle McLeod was always dangerous when on the ball and was my personal choice, however, others at the match suggested Soapy for another all round great game while the back four also get a special mention for their excellent performances.