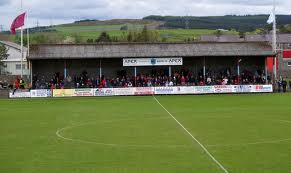 A late Paul Sheerin penalty broke Keith hearts as Arbroath scraped through to the fourth round of the Scottish Cup 1-0.

Though Arbroath had the obvious edge, Keith were not overwhelmed and striker Cammy Keith should have opened the scoring with a volley from six yards that he scuffed wide.

Arbroath turned the screw after the break through Brian Kerr, the midfielder's snap-shot volley forcing a reactionary save from Andrew Shearer. The Lichtiese continued to press and Craig Wedderburn hit the bar with a header from six yards.  Another header from Busch prompted a fantastic save from the home keeper

But just when it seemed a replay was inevitable, Kris Niddrie brought down Steven Doris inside the box in stoppage time. Sheerin slotted the penalty past Shearer and Niddrie's late sending off eliminated all hope of Keith grabbing a famous draw.

A LAST-GASP penalty from player/manager Paul Sheerin fired Arbroath into the fourth round.

And Sheerin praised his side persistence as it took them until two minutes into stoppage time to see off Keith.

Sheerin said: "I'm delighted to advance to the next round and we deserved it as we kept going right to the end.

"Keith put in a good effort and I was delighted to score the penalty."

The home side should have had a penalty in the first half when Graham Lonie was upended by Darren Hill. But referee David Somers enraged the Highland League side by waving play on.

Just as it looked as though the game would go to a replay, Steven Doris was brought down in the box by Kris Niddrie to hand Sheerin the chance to win it.

Keith boss Darren Still said: "I am very disappointed to lose. "We're not getting the run of the green at the moment with refereeing decisions.

"We were denied a clear-cut spot kick in the first half and then Arbroath's penalty was a soft award."