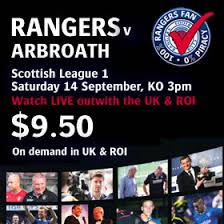 From the Sunday Mail:  THERE was an early shock in this game when the Red Lichties took the lead at Ibrox, but Rangers soon clicked into gear and demolished their opponents

LEE McCULLOCH scored his second successive hat-trick as Rangers finally overcame a spirited Arbroath side who took the lead through Alan Cook before conceding five goals in the last 30 minutes.

The hosts, who featured six of their summer signings, led from the back with central defenders Bilel Mohsni scoring on his debut and McCulloch's hat-trick, which turned the game in the home side's favour with Andy Little also scoring to leave Rangers emphatic 5-1 winners at the final whistle.

Rangers boss Ally McCoist talked up the risk of changing a side which had won its first four league games and Arbroath boss Paul Sheerin questioned if the Ibrox summer signings could all quickly gel as a team.

For the best part of an hour the visitors' boss looked to have called it correctly as Rangers' new-look side struggled to knot together and make an impact.

Arbroath, who held Celtic at Parkhead in last season's Scottish Cup on their last visit to Glasgow, had hopes of at least restricting a very experienced-looking Rangers.

From the start the visitors were compact and organised with on-loan Motherwell striker Lee Erwin hoping to unsettle the first-time pairing of McCulloch and Mohsni at the heart of the home defence.

However, it was at the other end that McCulloch almost made an impact after six minute

Arnold Peralta's corner led to a scramble in the visitors six-yard box but McCulloch, trying to follow up a hat-trick in his last game, was denied by Arbroath goalkeeper Scott Morrison.

Having withstood that early scare the Gayfield side grew in confidence and in the 13th minute only Mohsni's intervention to turn the ball past his own post prevented Cook's low cross reaching Lee Erwin.

With player-boss Paul Sheerin encouraging his young side from midfield, Arbroath looked anything but overawed by their star studded opponents.

And in the 20th minute Arbroath passed up the best chance of the first half.

Cook was again the provider from the left but his drilled ball across the six-yard box was just too far in front of Erwin's lunge as Bell's goal begged a touch.

Rangers' only threats came from set-pieces and from another Peralta corner Mohsni powered a header over the bar.

Arbroath's reply was a run from Darren Smith, which was unchallenged until from outside the box he fired a dipping shot just over Cameron Bell's bar.

The home fans' expectations had turned to frustration by the 35th minute and their feelings were vented on referee Crawford Allan, who waved aside hopeful appeals for a penalty as Jon Daly's run to meet a cross were impeded by Hamilton.

The visitors, though, remained calm in possession to comfortably keep the sides on level terms at the interval.

Any thoughts that the pattern of the game would be transformed on the restart were dispelled within two minutes when Arbroath opened the scoring.

Peralta gave away possession on the touch line and when Ross Chisholm fed the ball to Erwin he laid it off to Cook whose measured chip carried the ball over Bell and under his crossbar to stun the home crowd.

Rangers came within inches of an equaliser when an inswinging free kick from Steven Smith was almost turned into his own net by Michael Travis under pressure from Jon Daly.

The equaliser was only delayed until the 57th minute. Another free kick from Smith was cleared only as far as Nicky Law. His shot from just outside box took a deflection to the feet of Mohsni, who calmly side-footed past the helpless keeper for a dream debut.

The Ibrox men then played with a bit more urgency and David Templeton, on for Clark, dribbled past four opponents before firing his drive just over the bar.

As the pressure mounted on the visitors' defence Rangers grabbed the lead after 65 minutes.

Law's corner was met by the inrushing McCulloch who powered his header past Morrison.

The Rangers captain seemed to sense the referee had disallowed the strike before the players and fans acknowledged the goal.

There was no doubting McCulloch's second goal and his side's third after 75 minutes.

Peralta's free kick rebounded off the wall and from 30 yards the Gers captain drilled a superb shot high into the top corner.

That wrapped up the points but not the scoring. Two minutes from time Templeton sent Little through and his angled drive past Morrison made it 4-1.

Then in injury time McCulloch made it 5-1 to claim his second consecutive hat-trick nodding home Peralta's cross at the back post.