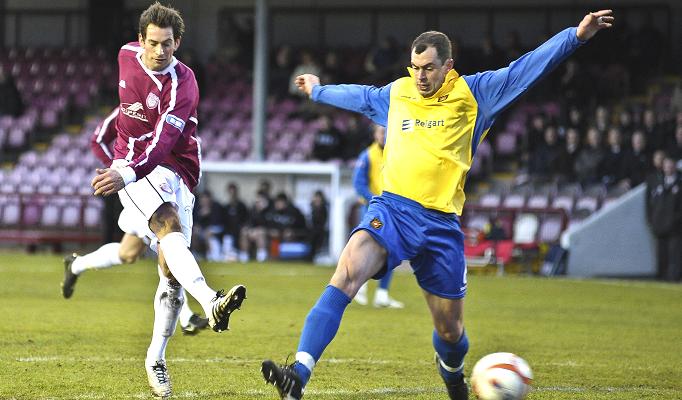 From the Sunday Mail:  ARBROATH playermanager Paul Sheerin watched his tabletoppers grab a late winner and admitted they were lucky.

Gavin Swankie scored the deciding goal in a thrilling derby that could have gone either way.

Scott Buist put City ahead but sub Lee Sibanda levelled before the break.  Steven Doris fired the Red Lichties in front from the penalty spot before sub Paul McManus equalised with his own spot kick.

However, two minutes from time Swankie sealed the points with a stunner and gave the Arbroath faithful the bragging rights.

But Sheerin reckons their local rivals didn't get what they deserved.He said: "A draw might have been a fairer result.

"Brechin started well and put a lot of dangerous crosses into the box."I just felt we were off it a wee bit today. But if it means going away with a win from a place like this then we'll take it."

Brechin had an early chance when Buist's cross found Mick Dunlop who sent his header just wide of the target.  Arbroath hit back with Doris heading past the post.  City came close in 22 minutes when Jim Lister headed a Neil Janczyk corner inches wide.

But they made the breakthrough in 29 minutes.  A Jancyk corner from the right fell for Lister in the box and his shot was only cleared as far as Buist who smashed a rightfoot drive into the bottom corner of the net.

But the visitors levelled seven minutes later.   Mark Baxter's cross found the head of Sibanda - who had replaced Sheerin just three minutes earlier - and he dived low to steer the ball beyond Craig Nelson.

McKenna almost put Brechin back in front but his shot went over the bar.  And at the other end Josh Falkingham sent an angled drive just past the post.  City came agonisingly close a minute before the break when Graham Weir volleyed a David Crawford cross off the post.

Brechin looked bright at the start of the second half but Buist headed a Janczyk free-kick straight into Dan Hill's arms in 68 minutes.  The visitors were lucky in 73 minutes when Stuart Malcolm almost sliced the ball into his own net.

However, the visitors grabbed the lead from the penalty spot in 78 minutes.  The ball was played through to Sibanda at the edge of the box and as he ran forward he was impeded by Gary Fusco. Ref Gary Hilland awarded the penalty and booked Fusco. Doris stepped up to blast the ball into the top corner.

However, City dramatically drew level from the spot four minutes later.  Malcolm fouled Janczyk in the box and Paul McManus, who had replaced Weir just a minute earlier, fired home the resultant penalty with his first touch.

The drama wasn't over as Arbroath grabbed a dramatic late winner.  Sibanda played the ball forward to Swankie at the edge of the box and the striker curled a tremendous rightfoot drive beyond Nelson.