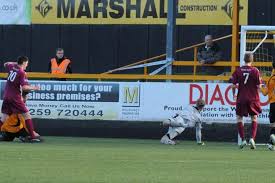 Sunday Mail:  FRUSTRATED Alloa gaffer Paul Hartley is set to add some firepower to his side after they slumped to their first home defeat in six months.

A first-half strike from Derek Holmes was enough for Arbroath to grab the points and leapfrog Forfar into fourth.

But it was a dreadful day for second-top Wasps and Hartley said: “We need to move on quickly. We must roll our sleeves up and try to get back to the basic stuff.

“I can put up with a defeat but not the manner of performance. We need more from the front guys and I will hopefully bring in someone before the game at Arbroath on Wednesday.

“It was poor. We did not play like the way we can play. We just did not get going at all. We were pedestrian in our passing and tempo. There was just no spark

“I am not going to make any excuses. It was just really poor.”

Alloa were first to threaten when striker Kevin Cawley’s shot was deflected for a corner in six minutes.

Despite a disappointing recent run Arbroath were well up for it and Ryan McCord did well to block Holmes' drive before a Steven Doris drive spun off the legs of an Alloa player to fly over.

At the other end Cawley fired in a snap shot from eight yards but Arbroath No.1 Scott Morris saved.

Five minutes before the break Arbroath struck. A blistering drive from player-manager Paul Sheerin was blocked by keeper Scott Bain and Holmes was there to stick away the rebound from eight yards.

They almost extended their advantage in the second half when Mark Baxter crossed for Sheerin but his glancing header flashed inches over.

Alloa introduced Eddie Ferns in a bid to get back to the game and he had the chance to draw them level. He ballooned his try over, though.

Thrilled Sheerin – whose side were recording their second victory at Recreation Park this season – said: “It was a great win because our away form has been disappointing and we have conceded goals right, left and centre.

“To come to a place like this and pick up another three points is excellent. We had lost two games on the bounce and to win is a massive result for us.”