In a real dogfight now 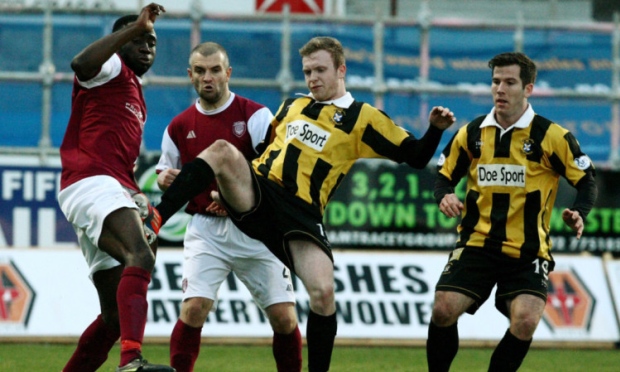 From The Courier:  With some tough games coming up, East Fife first team coach Dougie Anderson felt the 1-0 win over Arbroath was vital.

The visitors had the chance to leapfrog the Methil men and demote them to second bottom spot if they’d won.

But it was a result which never looked liked coming as Nathan Austin’s first-half goal ensured that all three points stayed in Fife.

Anderson said: “It’s a massive result for us. Our objective was to get the three points and the clean sheet.

“When you look at the run of games we’re heading into, we have Rangers, Stranraer, Forfar and Dunfermline and that’s a hard run so that made it important we got the win.

“In the first half we had a lot of success but in the second they really came back at us but we showed some real grit and determination.”

The home side started the brighter of the two as Arbroath seemed to be suffering a New Year hangover.

Ryan Stewart burst past David Banjo and made his way to the line but his cross was cut out by Scott Morrison.

Morrison was again called into action when Austin’s inch-perfect cross was met on the volley by Paul Willis but the Arbroath keeper was equal to his strike.

Arbroath’s first real chance of the game fell to former Fifer Bobby Linn but his close-range drive was beaten away by Greg Paterson.

East Fife grabbed the lead after some great work from Stephen Hughes ended with him slipping the ball to Nathan Austin.

The striker turned his man before firing under Morrison.

The game was played at the sort of tempo you’d expect from two sides who knew the importance of winning the three points.

The tackles were also thundering in and Gary Thom took a yellow for a rash challenge on Linn.

Austin almost scored his second when he found space inside the box only to watch as his effort was cleared off the line.

Sadly that was the end of the impressive striker’s day as he had to be carried from the park in some pain.

Arbroath boss Paul Sheerin admits he’ll need to strengthen if his side are to escape the play-off zone.

He said: “We’re in a real dogfight now. It’ll take a lot of graft to get out of it and we’ll need to look at bringing in another couple of bodies if we’re to start going in the right direction.”