Finishing the regular season with a flourish 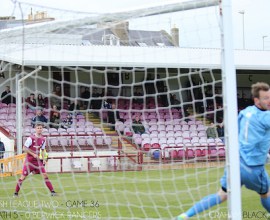 Berwick Rangers capped off a disappointing campaign with a performance which effectively summed up their season, a second half capitulation leading to Arbroath netting five and winning for just the second time in eighteen attempts.

With nothing left to play for, Colin Cameron made a few changes to the side – perhaps to help his decisions with regards to contract renewals in the Summer. Young Ben Miller started for the first time all season in midfield; Jonathon Fairbairn was shifted out to left back to accommodate a central defence partnership of Kerr Young and Stephen Tulloch, while Berwick trialled an attacking trio of Darren Lavery, Andy Russell & Blair Henderson.

Contrary to what the result suggested, Berwick were very much competitive in the game and in fact were the better side for pretty much all of the first half. The ‘Gers would have seven chances in the opening fourty-five, limiting the opposition to zero efforts on target.

As has so often been the case however, the ‘Gers lack of cutting edge in front of goal would come back to haunt them. Berwick’s best chance of the game came after 20 minutes, but Marc McCallum showed fantastic reflexes to beat away a Paul Willis strike.

Kyle Wilkie also went close not long after, with an effort which whistled just over former Berwick stopper McCallum’s bar.

Despite the ‘Gers superior possession and chance creation, Arbroath never looked like they were being outclassed and it came as little surprise that the home side, under the new management of former Albion Rovers boss Todd Lumsden would come out for the second half fired up ahead as players looked to earn their starting berths in the upcoming promotion play-off campaign.

In fact, it would only take seven minutes of the new half for Arbroath to open the scoring, Dundee United man Simon Murray winning the ball in midfield and sending Bobby Linn through with a classy ball, the League Two Player of the Year rounding Andrews and slotting home with ease.

As Berwick tried to muster some response, Nairn County loanee Wilkie struck an effort from distance, but McCallum was at ease to collect the ball.

However, the attacking line-up appeared to be having negative effects defensively with the ‘Gers defence lacking any real protection. Andrews showed good reactions to deny Murray a second headed goal, but any slim hope of a comeback were soon destroyed when Dylan Carreiro’s smart lobbed pass found Murray in the box, the striker rifling past Andrews to make it 3-0.

Things soon went from bad to worse as Berwick’s captain for the day Stephen Tulloch naively pulled down Kevin Buchan to deny a clear goalscoring opportunity, and was shown a straight red card for his efforts. Substitute Thomas Grant dispatched the resultant free-kick to compound the blow after eighty-five minutes.

And Arbroath would complete the scoring in the 89th minute when in bizarre circumstances Ricky Little netted, his long pass deceiving Andrews and landing up in the Rangers net.

The defeat meant the ‘Gers would finish 8th in League Two, a stark contrast from the club’s ambitions at the beginning of the campaign. The nature of the defeat will come of much annoyance (though not much surprise) to fans who will be looking to see a far more determined and passionate squad of players donning the black and gold next season.