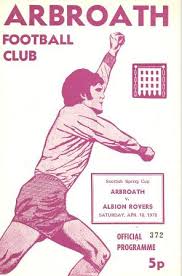 From the Sunday Mail:  ARBROATH'S Todd Lumsden has urged his players to set their sights on nothing less than promotion after they took top spot.

Paul McManus netted a second-half winner for new boss Allan Moore’s side as they edged out Rovers to make it two wins out of two.

And while Gayfield No.2 Lumsden claims the Arbroath board haven’t demanded promotion in their first term in charge, he believes it can be done. Lumsden said: “We want to go up. Whether that’s through winning the league or through the play-offs we don’t mind.

“Promotion is the end goal and there is a along way to go but you can’t ask for a better start than two out of two.”

The strong wind pinned Arbroath back for much of the first 45 minutes. But they took charge after the break and McManus timed his run perfectly after 67 minutes to drill home.

Rovers boss Darren Young said: “We had five corners and all went straight out. That summed up our day.”