Decent Lichtie performance but a draw not enough 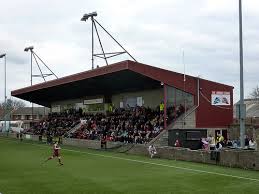 A decent enough showing from Arbroath in a very evenly matched game.   But two quality goals from the opposition (yes maybe our defence could have been tighter) pegged us back twice.

The officials (the ref just back from Europa Cup duty?@>!) were dire but our claim for a penalty for blatant handball was soon `balanced' by the Stenny player being booked for simulation after Scott Morrison thudded into him in our box)

We'll probably be back at Ochilview next season - to play Shire

From the Falkirk Herald:

Stenhousemuir remain in the hunt for the final play-off spot, but they could have thrown themselves right into the mix by taking more than a draw with Arbroath.

Twice they fell behind to the Red Lichties, but twice they came back through Ben Greenhalgh and Sean Higgins.

The Warriors now sit three points off Ayr United in the fourth spot as the Honest Men failed to take anything from their trip to Brechin.

But the Warriors were made to battle for anything to close that gap by bottom side Arbroath on a day when Scott Booth admitted they “didn’t play well”.

They fell behind in the first half when Paul McManus forced the ball beyond Chris Smith with the linesman’s flag raised. Ref John Beaton - who was hours off a plane from Europa League duty - ignored his assistant and correctly awarded the goal as the ball had struck a Stenhousemuir player en route to the former East Fife striker. He had been denied by Smith seconds earlier after a clever through ball from Bobby Linn that had him one-on-one with the goalkeeper but he made sure second time round.

The Warriors were forced intot wo first-half substitutions with Kevin McKinlay and Sean Lynch both limping off to be replaced by David Rowson and Sean Dickson.

The Warriors lacked size up top with Sean Higgins dwarfed by Arbroath’s loan signing from Falkirk Ryan McGeever, but they didn’t lack energy and a hard-working shift from Higgins was rewarded with a second-half goal.

It would level for the second time but it was the taller of the Little and Large attacking partnership Greenhalgh who levelled with a terrific strike.

A swing of the hips evaded two of the Smokies’ defenders and a skimming 20yard strike zipped into the corner of the net for the equaliser.

That was the case for the half-time break, a time when all the higher-ranked sides in League One were failing to win.

Stenhousemuir’s attempts took a dent in the second half when Bobby Linn had the vociferous away support on their feet by prodding the second over the line at the back-post, but only after Bryan Hodge struck the base of the post with a raking drive from more than 30 yards.

Scott Booth went for broke, having admitted his side must win each game to have a chance of extending their season into the play-offs, and he stuck by his word and threw on Ross McNeil for Nicky Devlin and switched to 3-4-3.

Eventually they made it count. Josh Watt’s dancing feet took him past five Arbroath players and into the box where he won a corner off Johnny Lindsay. The same defender conceded another from the set-piece but this one was made to count. Quick thinking brought the ball into play and as Watt dropped off to cross Higgins made room to glance the supplied ball intot he corenr and give the Warriors hopw of truly closing the gap and putting pressure on Ayr in the league table.

Ultimately they couldn’t however, it could have been worse. Paul Sheerin knocked a lovely chip onto the top of the crossbar and Kenny Deuchar struck a shot which Stewart Greacen pushed away with two hands, right infront of the referee, and no penalty was given.

Equally baffling was the decision to caution McNeil for a tumble in the box when clean through. Stenhousemuir sources later claimed Scott Morrison left the park chuckling in surprise as he admitted he “clattered” the former Rutherglen Glencairn frontman.

The result leaves Stenhousemuir three points off Ayr in the fourth and final play-off position, with four games to play.