Decent enough showing at East End till late on 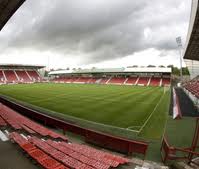 For our second appearance at East End in a week, we started with a very different lineup.  Hamilton had a roving role up front behind J Sheerin at centre, McCulloch and McAnespie switched fullback and midfield roles.  Gibson was out injured.

Overall as the radio reports confirm, we were very lucky to go down 5-2 in the end.   The first half was evenly balanced and we probably carried more of an attacking threat than the Pars.

Jim Hamilton (whose played in two stints for the Pars) gave a masterclass in the art of the centre/inside forward, his smart touches unsurpassed at keeping possession.   Darren Hill had an outstanding game brining off a series of fine saves and cruelly it was a speculative longrange strike which didn't stick which put Dunfermline ahead

In the end superior fitness and class told but there was never 3 goals in it.  the Pars second and fifth had a strong element of luck about them.  And we allowed our concentration to lapse just after we'd score to allow them an immediate equaliser first half.   Until Fifer pressures late on, we must have accumulated as many corners as them.

Like last week, the ref allowed the bigger team away with more, and it seems leading arms and shoulders in going for a high ball is now permissible.  The strength (and also greater height in this case) of the Pars counted here

Overall both goals were well taken - Sheerin getting in for a headre (poor Dunf marking maybe) then Swankie jinking in from the right to slide an inchperfect consolation late on.

Overall, last week was an exercise in containment and defensive discipline - this week we carried the game to the home team and created a number of chances.  Still a lot to be done but positives for the management team from both showings