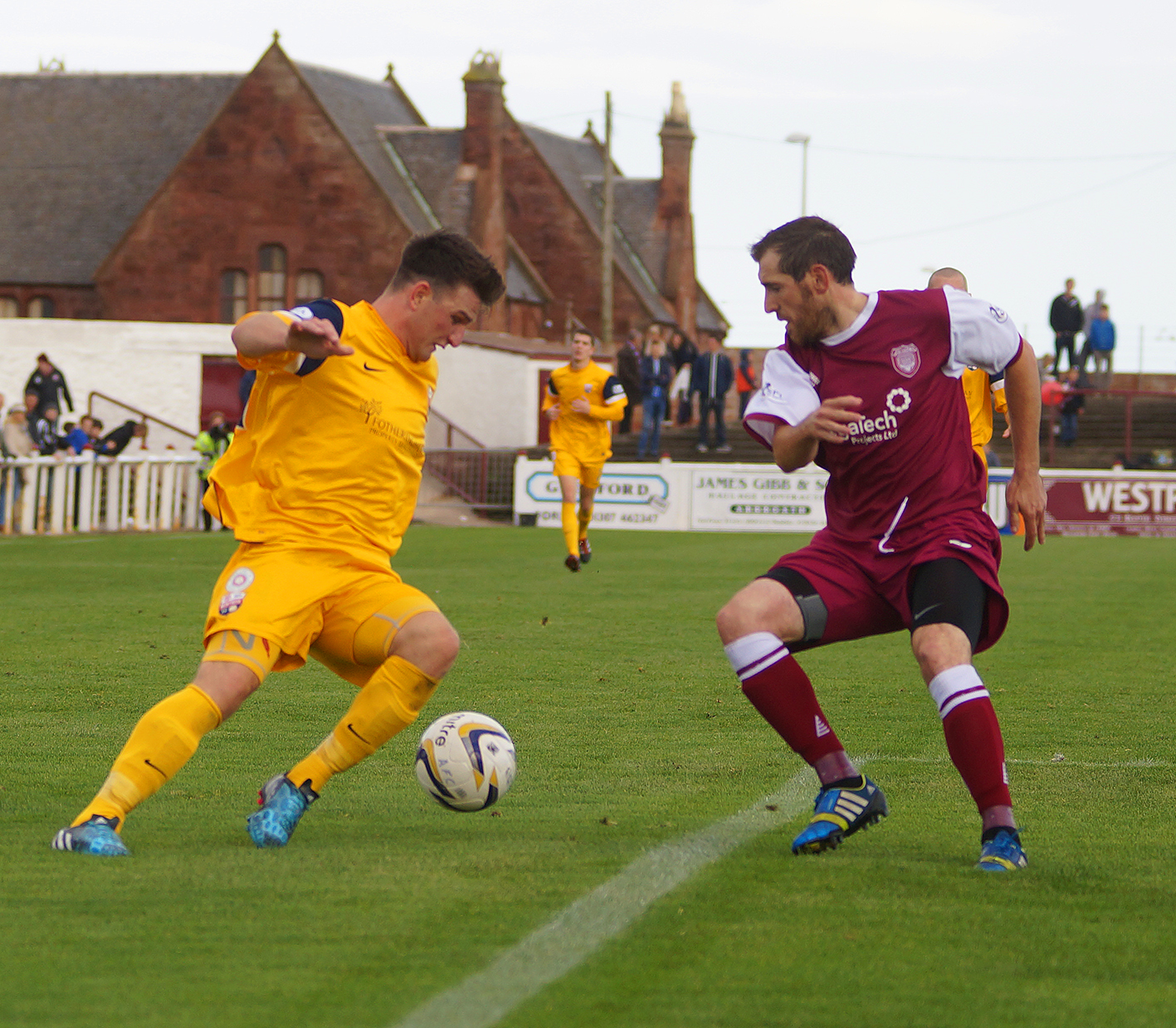 Montrose Football Club and league leaders Arbroath will have it all to do again this coming Saturday after they shared four goals in an end to end William Hill Scottish Cup second round tie at Gayfield Park. The Gable Endies coming from behind twice to grab a deserved second chance.

Arbroath took an early lead at Gayfield before Montrose fought back to equalise, the home side regained the lead before the Gable Endies once again came up with an equaliser through a raking Paul Watson free kick it was no more than they deserved.

Once George Shields men had equalised for a second time it looked like they would go on and win the match and had a great chance to do so in stoppage time only for Crawford in the home goal to deny Stephen Day.

The draw kept up Montrose’s impressive record of never having lost a Scottish Cup tie at Gayfield.

The replay on Saturday will mean that the sides will play each other three times alone in the month of October.

The Montrose line up showed four changes to the side who had lost heavily to East Fife the week before with manager George Shields looking for a response. Out went Birstingl, Masson, the suspended McIntosh and O’Neil. Back into the side came Stuart McKenzie, Craig Bell, Graham Webster and Scott Johnston.

The Gable Endies had gone to physically match their opponents and in a surprise move captain Garry Wood despite being listed as number 9 played in central defence.

Montrose lined up with McKenzie in goal and Crawford and Graham in the full back roles. Campbell teamed up with Wood at the back. Webster played down the right with Bell on the left. McCord and Watson were in the middle. Deasley and Johnston were in attack.

On the bench for Montrose were Harkins, Day, O’Neil, Robb, O’Kane, Cavanagh and Birnstingl.

It was Montrose who carved out the first opportunity at Gayfield when Paul Watson gathered the ball on the edge of the area and his netbound twenty yarder was finger tipped over by Crawford. McCord’s corner found Crawford but he could only head wide.

Despite have the first opening it was the home side that opened the scoring in the seventh minute. Simon Murray was the dangerman again as he was allowed space at the edge of the area to fire in a shot which rebounded off McKenzie’s post and it was PAUL McMANUS who had the easy chance to net the rebound from six yards out.

Montrose tried to hit back and two minutes later Wood was inches away from connecting with a McCord corner inside the six yard box.

Montrose had a let off seconds later when McKenzie dithered at the edge of the box and instead of gathering the ball he blasted it straight off McManus, luckily for him it went straight past the post.
With ten minutes gone a header from Johnston put Deasley in down the right but he fired well past the far post.

In the 15th minute Montrose were back on level terms and the cup tie was back on. Deasley won a free kick on the right. Ross McCord curled over and inch perfect kick and captain GARRY WOOD was on hand inside the six yard box to headed home his fifth goal of the season. He celebrated in some style with the Montrose fans behind the goal and his team-mates.

Murray was proving a handful for Montrose and in the twentieth minute Campbell tangled with him and luckily for the Gable Endies the ball found its way back to McKenzie.

After getting themselves back into the match Montrose shot themselves in the foot by gifting a goal back to Arbroath in the 24th minute. Some slack play on the touchline gave the ball back to the home side and Stewart played a pass to ADAM HUNTER who looked up before firing a low 25 yard effort into the bottom corner.

Play was then held up when Crawford and McBride clashed heads after the home player missed the ball at the back post but both continued after treatment.

In the 33rd minute Deasley was tripped by Ali El-Zubaidi giving Montrose a free kick some thirty five yards out. McCord’s free kick fell perfectly to Deasley inside the six yard box and the striker looked certain to score until and Arbroath leg got in the way of the ball to divert it out for a corner kick. From McCord’s corner kick Garry Wood headed wide on the stretch.

Arbroath almost punished Montrose again with four minutes of the half remaining, After losing possession again near the corner flag while attacking the home side raced clear and one pass put Bobby Linn clear but the ex Dundee man shot wide of the post.
It was Montrose who restarted the second half in pleasant conditions but the home side who had the first real chance when Linn’s cross found Murray but he could only head up and into the arms of McKenzie.

Montrose then had a chance when Watson gathered his own set piece and fired in a low 25 yard shot which was deflected wide. McCord again sent over a perfect delivery but this time it was Crawford who headed over the crossbar.

A pass from Linn again found Murray but McKenzie pushed his effort around the post. Hunter’s corner kick was comfortably gathered by McKenzie.

The home side kept up the pressure and forced a couple of corner kicks and from the second McKenzie was able to punch the ball clear.
With 53 minutes gone Montrose again lost the ball in a dangerous part of the pitch and Simon Murray saw his shot pushed around the post by Stuart McKenzie.

Two minutes later a free kick from Watson was blocked by the home wall but rebounded back to McCord who saw his lob gathered by ex Montrose keeper David Crawford.

The first booking of the match arrived in the 57th minute and it came the way of Montrose captain Garry Wood. He was penalised for a late tackle despite the flag being raised for offside against Simon Murray. Thankfully for Montrose no damage came of the free kick from Hunter.

The Gable Endies made a change before play resumed with Stephen Day coming on the left hand side of the park to replace Craig Bell.
Montrose then forced a free kick on the sea side of Gayfield but Wood could only divert McCord’s kick wide of Crawford’s goal.

Gayfield erupted once again in the 63rd minute when Montrose found an equaliser. Wood was pushed near the touchline and PAUL WATSON produced some more free kick magic by firing into the roof of the net at Crawford’s near post with John Crawford trying to claim that he had headed the ball into the net. Watson celebrated with the delighted Montrose fans as he ran down the touchline.

Montrose now had the bit between their teeth and three minutes later a great run and cross from Bryan Easley was deflected out for a corner kick. McCord’s kick was cleared by the home defence.

Jonathan Crawford became the second booking of the afternoon for another late tackle after the ball had gone.

Ross Graham then broke from his full back position to gather a McCord corner but his effort from the edge of the box went wide of goal.
The home side made their first change in the 73rd minute bringing on Kevin Buchan for goalscorer Paul McManus.

Arbroath won a corner and played it short for Bobby Linn who raced into the box only to see his effort being tipped over the bar by McKenzie.

The home side’s centre half Ali El-Zubaidi finally picked up a yellow card with ten minutes remaining when he blocked the path of Ross McCord.

It was to be McCord’s last involvement in the match andhe and Graham Webster where replaced by Stephen O’Neil and Paul Harkins.

Arbroath then brought on Michael Travis for Scott McBride.
Two minutes later Bryan Deasley broke quickly down the right hand side of the park but shot into the arms of Crawford.
Travis had only been on the park for a couple of minutes when he was booked for a foul on Stephen Day.

The game was starting to get stretched as both sides were going for it and with four minutes left a slip from O’Neil let in Simon Murray for a great chance but the youngster took a fresh air swipe at the ball and the chance was wasted.

The bookings continued and Arbroath’s Craig Johnstone was next into over fussy referee Nick Walsh’s book this time for a foul on Bryan Deasley.

Paul Watson took the free kick which appeared to be heading in until Crawford sprung to his left to tip the ball over the bar.

The chance to win the match for Montrose came in the final seconds of the match. Graham played a great pass up the left wing, Deasley flicked the ball on and Stephen Day raced clear unmarked into the box but with only Crawford to beat he fired straight at the keeper.

The final action of a pulsating Angus derby cup clash came in stoppage time when Scott Johnston was booked for a tackle on the touchline.