Controversial winner but a fair result? 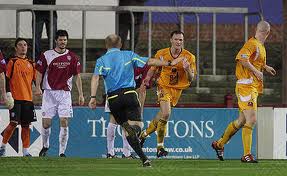 From the Daily Record:  A CONTROVERSIAL Bryan Prunty free-kick put Dumbarton in the driving seat after they battled back from a goal down in the first leg of their First Division play-off.

Stuart Malcolm had given Arbroath the early lead before Tony Wallace levelled the tie.

But the game turned in 61 minutes when ref Craig Charleston ruled a sliced clearance from Mark Baxter that was caught by keeper Darren Hill was a passback.

The Arbroath players were incensed at the decision and their sense of grievance only intensified when Prunty stepped up to blast the free-kick through the wall and into the net.

And Sons gaffer Alan Adamson added: “It was a passback to the keeper – What else was he trying to do?”

The home side bossed the early exchanges but it was Arbroath who took the lead in five minutes.

Josh Falkingham swung in a corner and centre-half Malcolm rose above the home defence to nod home.

Hill then reacted well to punch away Scott Agnew’s fierce strike in 16 minutes but the ball fell at the feet of Wallace and the keeper couldn’t recover in time to prevent the defender stroking home.

The Sons were now on top and a powerful Agnew free-kick tested the Arbroath defence in 37 minutes but the outstretched leg of Kieran McAnespie diverted it over the bar.

Arbroath player/boss Sheerin replaced himself with Keith Gibson at the start of the second-half and was forced to watch from the sidelines as Baxter’s blunder condemned his side to defeat. The defender was trying to clear a ball into the box but ended up slicing it into his keeper’s arms.

Charleston gave the free-kick – booking the keeper in the process – and Prunty blasted his shot through Arbroath’s wall.

Dumbarton could have extended their lead five minutes from time when they won another free-kick but this time Agnew’s shot sailed just over. A final flurry from the away side saw sub Lee Sibanda lift a shot over Stephen Grindlay’s bar.

Dumbarton boss Adamson said: “There’s a real never-say-die attitude about the boys. That’s the fourth time in a row we’ve come from behind to win 2-1.”

Arbroath boss Paul Sheerin said: “We know what we have to do now – win on Saturday even if it takes extra-time and penalties.”