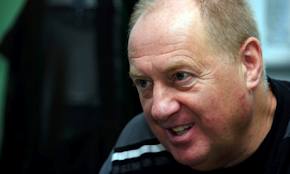 Billy Brown branded Arbroath ‘lucky’ after they nicked a win over his East Fife side.

And the frustrated Fifers manager insisted: “It was a complete injustice.

“The team played quite well but really, we can’t win. To lose a goal like that’s just disgraceful.

“And Arbroath are the luckiest team alive to win that contest.”

Michael Brown dived well to block a spot-kick from Arbroath player-boss Paul Sheerin in 37 minutes after striker Lee Sibanda was brought down by Paul Willis.

But it was Bayne who secured the points by prodding home late on after Sibanda’s header rebounded off the post.