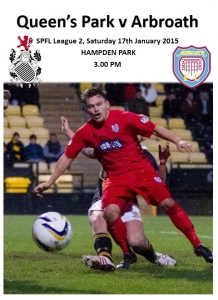 As fixtures go there won’t be many tougher than today’s as league leaders Arbroath come calling at Hampden. The good news for Spiders fans in the build-up to the match is the addition to the squad of 21-year-old forward Ryan Hynes who joins until the end of the season from Drumchapel Amateurs. Hynes had featured as a trialist on five occasions for the development squad, scoring in four of these games.

Ahead of the match the club website caught up with gaffer Gus MacPherson to get his thoughts on the task in hand, as well as to reflect on last Saturday’s goalless draw with East Fife.

On the 0-0 draw at Bayview last weekend Gus was “disappointed” not to have taken all three points from the match. He added: “I felt we controlled enough of the game to have deserved more but ultimately we never created enough clear cut chances in front of goal.

“There are, however, positives to be taken from the game, one being a clean sheet away from home and another point on the board at a crucial stage in the season”.

Gus was also keen to stress just how far he feels his squad have come in a short space of time by highlighting that only one game has been lost in our last 16 league fixtures.

Looking ahead to the visit of Arbroath the manager was hopeful of getting back to winning ways. Gus said: “It will be a very tough fixture. If we play to the standards that the players have shown to be capable of then there is no reason why we couldn’t take something from the game.

“Our performances this season have gained the respect of other teams and it has also seen teams change their tactics when they have come up against us. That’s testament to how the players have performed this season. It’s vital that we continue that hard work and going forward, try to turn draws into victories.”

On the squad front Gus confirmed that he would again be denied the services of Ross Gallacher and James Baty as both players continue their rehab from injury. The manager did however confirm that Hynes goes straight into the squad having trained with the first team this week.

History shows that this fixture has traditionally been a closely contested one. In 141 games, 52 of these have been won by Queen’s and 51 by Arbroath. It’s almost as tight when you delve further and compare the 183 goals scored by the Spiders to the Red Lichties’ 178.

Queen’s biggest home win over Arbroath was a 6-1 victory at Hampden on March 23, 1923, with JB McAlpine bagging a hat trick. That season saw Queen’s go on to become Division Two champions.

Arbroath’s biggest away wins over the Spiders were two 4-0 successes. The most recent of these came in May 2010 in the play-off semi-final when goals from Ross, Redman, Nimmo and Moyes sealed victory for the away side.