See the full story at http://www.arbroathherald.co.uk/sport/local-sport/time-for-watch-to-come-home-1-2743688

The photo is of Willian Fordyce, one of the winning Dewar Shield team of 1937-38 whose commemorative watch it probably was.

The 1930s Arbroath team was the first of our `great sides' which eventually won promotion and stayed in the top league until leage reconstruction after the war. 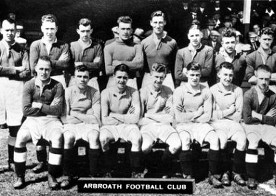