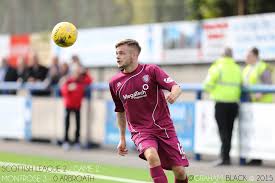 Anderson turned down the Red Lichties appeals after Andy Ryan appeared to have his feet swiped by East Fife keeper Ryan Goodfellow. Gayfield Park boss Lumsden said: “The only person in the stadium who didn’t think that was a penalty was the referee. “How he didn’t give that I have no idea. Our player was clean through and had absolutely no reason to dive.”

Jonathan Page blasted in from six yards in 13 minutes before Craig Watson levelled with a bullet header.

Ryan, who rounded Goodfellow before falling to the deck, then copped a yellow card for simulation 15 minutes from time.