The Campbells are coming 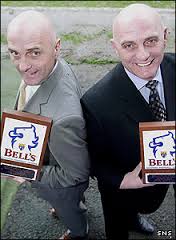 From the Arbroath Herald:  Dick Campbell thrilled to take manager’s post at Arbroath

New Arbroath manager Dick Campbell is delighted to return to Angus and take charge at a “very well-supported club” like the Lichties.

Campbell has agreed an “open-ended” contract with the Gayfield club and will be at Tuesday night’s game with Berwick Rangers, though he will likely take a back seat for the game and let his assistant Ian Campbell and first team coach John Young take the game.

They’re big enough for development, they’re very well supported. And it’s not for me to say they’re in the wrong position. They’ve got a great history, they’re steeped in history.

The former Brechin City and Forfar Athletic manager said Arbroath are a big club in a false position, with plenty of potential for development.

And if Dick can emulate the progress Forfar enjoyed under his tenure, the Lichties fans will be rightly thrilled.

The new manager said: “It’s a good club, a well-run club with very good people. That’s why I’m going back to Angus.

“They’re big enough for development, they’re very well supported. And it’s not for me to say they’re in the wrong position. They’ve got a great history, they’re steeped in history.

“I really liked how they went about their business and how they answered any questions I put to them.

“One door shuts and another one opens. I’m hands on, I’m taking my brother and John Young with me.

“I’m very happy, Arbroath is a good club with good people, and I’m a people person.

“I know the players there, it’s a good team and they’re in a bad position.

“We’ll go to Berwick tonight, I’ll take a back seat and let my brother and John Young take the game, see how things go.”

Chairman John Christison was elated to bring in a manager of Campbell’s experience, and said he’d love Arbroath to win the fifth championship of Dick’s managerial career.

John said: “We’re absolutely delighted with this appointment. To get somebody of Dick’s experience is just exactly what we’re needing right now.

“The club obviously is needing a lift and Dick’s natural enthusiasm will certainly do that.

“We’re just happy that we’ve been able to get him on board. His name, his experience, all these things.

“He comes with a great reputation, he’s won four championships and that’s where we want to be as well - his fifth championship team.”