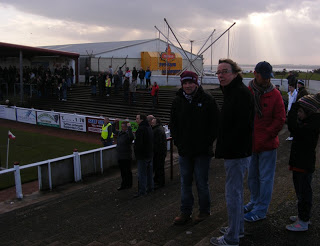 ....It's the second time in three days Arbroath have thrown away a two goal lead, resulting in an epic bout of swearing from the Gayfield Park fans.  "Fucking awful",  screams one. "This is rubbish," shouts another. "Pathetic, Arbroath. Absolute shite!"  The first-half goalkeeping critic is slightly more constructive: "We're not going to win the league playing like this, are we?"he asks.