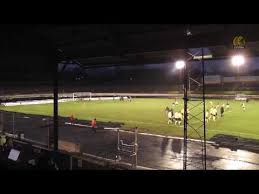 In awful winter weather - wind and heavy rains at already surreal dystopian Central Park, Arbroath put on a good showing in front of a large, noisy contingent of away fans.  We controlled muh of the game

It was a surprisingly lively game under the conditions and Arbroath created quite a few openings, especially second half.   Whatley hammered in a  volley from a corner which fell nicely to him on the edge of the box on 56 minutes.

From there on we carved out  at least half a dozen openings but careless or wild finishing kept Cowden in the game and after a spell of pressure a glanced header beat Fleming to level it at 1-1 in the 76th minute.

Thereafter both teams went for it.  Cowden hit the bar, and threatened on a few occasions.  Arbroath opened up the Cowden defence several time with Linn, Rutherford,  Munro and Ramsay all missing chances which looked earier to score from.