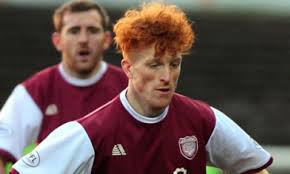 From The Courier:  Simon Murray wants to become a champion with Arbroath before heading back to Dundee United.

Murray, who signed for the Tangerines on Sunday in a deal worth in the region of £50,000, has been loaned back to the Lichties until the summer.

And, with the Angus club currently sitting four points clear at the top of League Two, free-scoring Murray is looking to bag the goals that can help bring the flag to Gayfield.

“I am going back to Arbroath on loan and that gives me a great opportunity to win the league,” said the striker, who has found the net 18 times this season.

“If I could help get them promoted then I would leave on good terms.

“Then, when I come back to United, it will be up to me to work hard, bulk up and then the goals will hopefully come.

“I was scoring goals at Arbroath and that obviously got me noticed.

“I got the phone call on Friday night and things developed from there.

“There were two or three (clubs after me) and United was the best choice for me personally.

“The biggest part of my signing is that it’s a club that gets young players in and gives them a chance.

“Not a lot of teams do that so it’s the right move for me.

“As a player I am hungry and will be willing to learn from the experienced players at United.”

Murray is hoping it will be second time lucky for him, adding: “I was at Tannadice before as a kid when I was just 12 and 13 but it didn’t work out then.