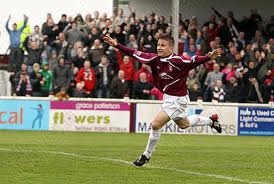 The former St Johnstone players lit up the third division last season as Arbroath secured the championship and promotion.

Having put themselves in the shop window, the duo were expected to be snapped up and make a quick return to full-time football.

However, while Swankie has had initial contact from Ross County about a move, that deal seems to have stalled.

Falkingham has returned to his native England and he also awaits a call from a full-time club.

As the clock ticks down to the start of pre-season training for many clubs, Sheerin is clinging on to the hope Swankie and Falkingham may yet accept their new deals.

"I spoke to Gavin at the start of the week and he admitted that nothing has happened so far between himself and Ross County," he said.

"Josh is back down south working and looking for a full-time club. But he has nothing yet so I still have hope that I could yet tie both of them up for next season."

Meanwhile, Sheerin is keeping his fingers crossed he may have a new signing to announce later this week as well as confirm the re-signing of two players from last season.

However, he was keeping their identities close to his chest. He said, "Until they actually put pen to paper, I do not want to say too much."