Second half turnaround at Broadwood 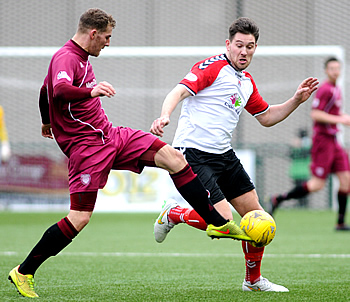 From the Clyde website:  The Bully Wee had a disappointing afternoon in the Ladbrokes League 2 promotion race today, as two quick-fire goals in the second half allowed Arbroath to leave Broadwood with a victory.

Barry Ferguson made two changes to the starting line-up following Tuesday night's win over Annan, with Marvin Andrews and new signing Jordan Kirkpatrick replacing the injured pair of Michael Bolochoweckyj and Sean Higgins. Scott McMann also returned from injury to take a place on the bench for the first time since joining the club from Hamilton Accies in January.

Clyde started the match well and Mark McLaughlin had a good chance to score from a Scott Linton corner, but he couldn't keep his header down.

The opening goal did come though, after 8 minutes. Excellent work by Scott McLaughlin - rounding the 'keeper and cross the ball into the box - gave Kirkpatrick an easy chance to score on his debut and he made no mistake.

However, soon afterwards at the other end, Arbroath should have equalised when the ball was played back to Greg Rutherford in front of goal, but the forward completely miscued his shot.

David Gormley was then forced to leave the field with a hamstring injury and he was replaced by John Gemmell (pictured).

The Bully Wee should have taken a two-goal lead into the half-time break, but McLaughlin's shot from the edge of the box didn't have enough power and Linton's effort was blocked in front of goal.

Early in the second half, The Red Lichties completely changed the match with two goals inside as many minutes. The first came via a Bobby Linn penalty after Scott Durie was sucked into a challenge on Josh Skelly, before Ricky Little blasted the ball home from close range after Marc Waters couldn't hang on to the ball under pressure.

A tired looking Clyde team struggled to get back into the driving seat after that, with the closest attempt to an equaliser coming when Kirkpatrick's chip shot drifted just wide of the post.