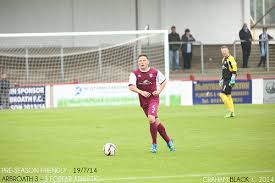 From the Arbroath Herald:  Arbroath defender Andy Munro has hailed the spine of the team after the Lichties moved into the next round of the Scottish Cup.

Goals from Martin Grehan and Darren Ramsay helped Todd Lumsden’s side see off Highland League champions Brora Rangers 2-1 on Saturday and Andy said the unwavering positivity in the dressing room has been key to Arbroath coming back from a poor start to the season.

And Munro believes the team boasts a fearsome spine down the middle, reserving special praise for defensive partner Ricky Little, who he describes as the best in the league.

The centre half said: “If games at the start of the season had started at five past three we’d have been flying. We stuck together, the boys are brilliant in the dressing room and the gaffer and assistant are great. Nobody turned up to training dreading it which sometimes happens in a bad patch, but not for us - we were looking forward to getting together.

“We all knew that once the first win would come others would follow, as they did. It’s a very hard league and anybody will beat anybody. The spirit in the camp is great.

“I think it helps having a pretty settled back four but it’s hard to change a winning team. I didn’t play in the win against East Fife and they kept a clean sheet, so I was just lucky to get back in else I’d maybe not be playing as much. But you have to take your chances when they come.

“And the form Ricky Little’s just in, when he plays like that it’s hard to see anyone beating us. He’s the best centre half in the league by a country mile, he’s phenomenal.

“There’s nothing stopping Bobby Linn on his day and then boys like Mark Whatley and Martin Grehan, Grehan’s a monster to play against - I hate playing against him in training. It’s a good spine of a time there with those boys and they’re very hard to play against.”

This weekend is the visit of Elgin City and an opportunity to move up to the top end of the League Two table, as well as get revenge for the 3-0 loss to the Black and Whites in August.

Andy added: “It’s a good chance to overturn what happened in the first quarter. We’re sitting eighth now but with how things are sitting, with a win and the right results I think we could jump as high as third which goes to show just how tight the league is. I think going up there with the spirit in the camp we’ve got, we can win.”