Manager Paul Sheerin is clearly getting used to the fare on offer in the lowly Third Division... 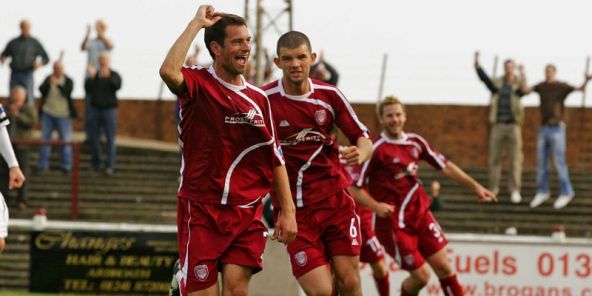 Difficult to sit through (from The Courier) -

A delighted Sheerin said that he was pleased with the way his side improved in the second half after a disappointing opening.   But he acknowledged that the winds had made flowing football difficult at times.

Sheerin said, "It's possible that the winds affected things a bit but it was probably one of the worst games of football I have ever watched in the first half.   "If I was a neutral I would've found the opening half hard to sit through."

He added, "I thought they had a far better start in the first half, but in the second we had a hunger and I think we just got after the ball better than they did and got the goal.  "Overall it's possible that a point would've been a fairer result but I'm delighted with the two clean sheets and two wins."

Sheerin said that he was pleased to bag the two recent results in spite of some injuries, and said the results would lead to welcome competition among the players

from the Press & Journal

MATCH-WINNER Gavin Swankie tormented Queen’s Park to such an extent at Gayfield on Saturday Red Lichties manager Paul Sheerin believes his midfielder is simply too good for the Third Division.

Swankie grabbed the only goal of the game with 13 minutes to go when he rose above the Spiders’ defence to direct Sheerin’s cross high into the net.

It capped a hard day’s work for the former Dundee and St Johnstone player, who is now enjoying his third spell at Arbroath.   Swankie went within inches of opening the scoring in the fifth minute but his 25-yard free kick went narrowly over the bar.

He went close again with another effort which Queen’s goalkeeper Adam Strain did well to block.   Then midway through the second half he brilliantly fired another long range free-kick low into the net, but referee Craig Charleston disallowed the goal because another Arbroath player was deemed to be interfering with play in an offside position.

Sheerin said: “Swankie did well. We know what he’s capable of and with all due respect to Arbroath, he probably shouldn’t be here. Hopefully, we’ll have him for some time yet though.”

The Gayfield manager was happy his side has now enjoyed two shutouts after leaking eight goals in the opening three games of the season.

He said: “It’s pleasing to keep another clean sheet but I thought a draw was probably a fairer result over the piece.”

Both sides worked hard in the adverse conditions and Queen’s certainly created plenty of chances.  Paul Harkins, Michael Daly and Martin McBride all came close in the opening period while Ian Watt finished off a fine run by guiding the ball a foot wide of the post at the start of the second half.

Watt also had a penalty claim turned down. Red Lichties’ defender Kevin McMullen appeared to use a hand to block his powerful shot from the edge of the box.

Spiders manager Gardner Spiers said: “We didn’t take our chances, more so in the first half.”