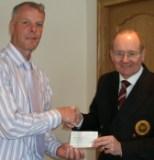 A raffle, organised by Steeplejack, was held was held at this afternoon’s home game to Cowdenbeath.   There was a great response.  One hundred £1 tickets were sold to raise funds for the club.  Steeplejack added “but I could have probably have sold double that”. The prize was a Barcelona strip donated through this site.

e the final draw of the winning ticket

The lucky winner of the genuine Barca replica strip was Don Yule,

The cheque for £100 was handed over by Steeplejack to AFC Chairman John Christison. 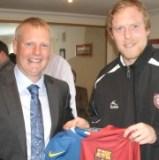 The Predictions League, painstakingly and professionally set up and maintained by SJ throughout the season, helps keep Lichtie fans interested and raises much-needed funds for the club. He deserves real credit for this fine effort.