Powerful Pars sweep on in the Petrofac 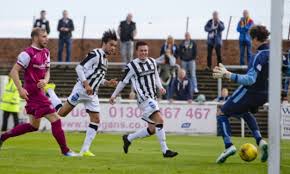 From the Arbroath Herald:  Finally the new season was ready for the big kick off, and with a Lichties team brimming with fresh new signings there was an optimistic expectation within Gayfield.

This feeling was perhaps going to be tested before a ball had even been kicked as it turned out that both manager Todd Lumsden and his assistant Steven Hislop were both on holiday, leaving club captain Mark Whatley and goalkeeping coach Mike Cargill in charge of the team.

Any preparation and planning must have been thrown to the floor as Dunfermline raced into a two-goal lead within the opening 20 minutes.

Despite being a League One side, the Pars are still full time and they took to the match with a high speed tempo that left new manager Allan Johnston highly impressed.

The tormentor of the Arbroath defence was Moroccan Faissal El Bakhtaoui and in the ninth minute he shrugged off a Jamie Clarke challenge before finding space 20 yards from goal and curling a right footed shot into the bottom left of Allan Fleming’s goal.

The Lichties were being pegged back and when they did win the ball they were struggling to do anything in the final third.

The second goal came via a slick counter move which allowed Ryan Williamson to find space down the right wing and it was his cut back that found Michael Moffat hovering six yards out and from that distance he made no mistake, sliding the ball under Fleming.

The Pars were coasting and the game really was all over in the 28th minute when another Williamson cross was headed in at the rear post by El Bakhtaoui.

Arbroath could have lost another three goals in a pulsating performance by the Fife team but were saved by the woodwork and crucial saves by Fleming.

It was a very sobering 45 minutes for the Lichties players and support.

The Arbroath fans were looking for a response from their team as both sides came out unchanged for the second half.

However El Bakhtaoui almost nicked his hat-trick within 90 seconds of the restart but Fleming’s quick reflexes pinched the ball from the skilful striker’s boot.

To the relief of the Arbroath back line he was replaced in the 58th minute by Ryan Wallace, but the substitute smashed home from 20 yards in the 62nd minute.

Before the game restarted Arbroath made a double change with Lewis Coult and Jamie Reid being replaced by Martin Grehan and Spaniard Sergio Cecilia Alvarez.

The Lichties had only shown glimpses of what they are capable of, and again it was star man and captain Bobby Linn who was showing inspiration as he made his familiar darting runs down the wing.

The Arbroath substitutes were making a difference to the game and in the 72nd minute a Bobby Linn corner was initially cleared by Ben Richards-Everton, but the ball fell at the feet of Clarke whose scuffed shot fell in a crowded box.

Ricky Little turned and capitalised but his deflected shot spun into the air and into the path of Grehan, who made no mistake with a crisp volley from five yards.

It was a good finish by the former Stenhousemuir striker and gave the home support something to cheer.

As the clock ticked down, a neat run forward by Graham Hay set up Linn but his shot pinged over the crossbar.

As the full time whistle blew it was Dunfermline who deservedly went through to the next round.

The Pars were strong in all areas of the pitch and Allan Johnston’s side must be strong favourites for League 1.

For the Lichties, well they have to put the defeat behind them