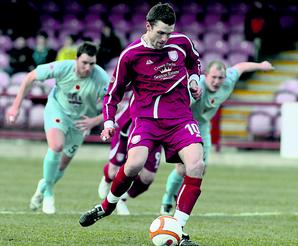 From the Sunday Mail:  Raging bull

RAGING Jim Weir slammed his shot-shy side after they failed to see off nine-man Stenny.  The Arbroath boss watched his men blow a string of chances and admitted the draw felt like defeat.

He said: "We didn't have enough quality in the box when they went down to nine men. We needed to show patience but our delivery and decision making were poor.  "There's no doubt it's two points dropped rather than a point gained."

It was a fizzing start to the game with Arbroath awarded a penalty in just four minutes.  Jamie Redman was sent flying by Stenny's Stephen Thomson but Steve Hislop's tame effort was saved by keeper Chris McCluskey.

However, three minutes later Redman fired the home side ahead with a neat chest and finish from Kenny McLean's cross.

The Red Lichties went in search of No.2 but found themselves pegged back in 24 minutes.  McLean brought down Kevin Motion in the box and the midfielder made no mistake from the spot.

Arbroath should have been back in front just after the break but McCluskey's stunning save denied a curling effort from Callum Booth.

Stenny's Iain Thompson saw red soon after for a second yellow after chopping down Steven Doris.  And team-mate Willie Lyle followed him up the tunnel minutes later for a poor challenge on Booth.

Boss John Coughlin was unfazed by the sendings off, saying: "To get a point with nine men was a bonus. I'm just pleased not to lose."

From the Press & Journal:    Arbroath fail to press advantage

ARBROATH extended their unbeaten run to three games but will be disappointed not to have taken three Second Division points against nine-men Stenhousemuir.

The visitors had Iain Thompson shown his second yellow card of the game in the 74th minute and nine minutes later William Lyle was shown a straight red for a challenge on Callum Booth.

Lichties manager Jim Weir said: “We had a couple of half chances, but we didn’t get enough quality balls into the box when they went down to nine men.  “Our deliveries and decision-making were poor.  “It’s definitely two points dropped rather than a point gained.”

The Lichties now go into a demanding schedule of four away ties, starting on Tuesday with a trip to Cowdenbeath.

It was a frantic start to the game as after four minutes Steve Hislop missed a chance to give his side an early lead when his poor penalty was easily saved.   However, four minutes later, Arbroath were ahead. Kenny McLean picked out Jamie Redman with a cross and the midfielder chested the ball and then drove it past Chris McCluskey from a tight angle.

The Warriors levelled in the 24th minute thanks to the second penalty of the game. Kevin Motion scoring from the spot after he was fouled by McLean.

The second half also started at a fast pace and in the 47th minute Hislop was played through by Keith Gibson but the keeper blocked for a corner.

With Stenny reduced to nine men, the home side commanded the final stages of the game but was unable to find a winner.   Stenny manager John Coughlin said: “When you’re down to nine men, to get something out of the game is a bonus.”