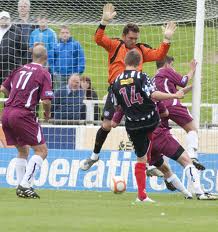 Normal service resumed, despite a major turnover in personnel. The first round Ramsden Cup jamboree at Elgin was entertaining enough -

The highscoring streak of games with Elgin continues (two 3-5 games in our Div 3 championship season).

Our continued stress on attack was electrifying but something has to give - and that's in defence.   So no change there - but maybe taking Keddie off after 47 minutes left us exposed

This was Darren Gribben's third hattrick against them for three different teams.

Great to see Sibby get three.  First double hattrick for our players since Allan Brazil and Pat Clarke did the same ina  7-2 victory over Shire 5 years ago

Lee Sibanda and Darren Grubben fired hat-tricks in a 12-goal thriller for Arbroath who won 7-5 at Elgin in the first round of the Ramsdens Cup.

Midfielder Sibanda gave Arbroath a 16th-minute lead when he converted Keiran Brennan's cross from close range and although Craig Gunn equalised for Elgin three minutes later, Steven Doris struck for the visitors in the 21st minute and Sibanda grabbed his second from the edge of the penalty area soon after.

Sibanda converted from inside the penalty area for his hat-trick two minutes before the interval and there was still time for Grubben to notch his first of the afternoon from close range to make it 5-1 to Arbroath at half-time.

Stuart Leslie and Daniel Moore struck in the space of two minutes at the start of the second half to give Elgin hope and reduce the deficit to 5-3 but Grubben despatched a sixth for the visitors in the 66th minute and sealed his hat-trick four minutes later when he converted from the penalty spot following Elgin striker Moore's foul on Daniel Rennie.

Elgin were not finished, though, and struck twice in the final four minutes through Dennis Wyness and Leslie in an extraordinary cup tie.