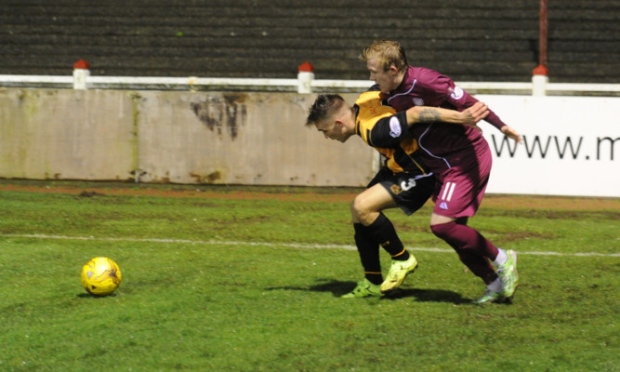 Arbroath ended a five-game spell without a league win by grinding out a hard-earned victory over Berwick in atrocious conditions at Gayfield.

The Lichties trailed at the interval but struck back with three goals from Bobby Linn, Craig Wilson and Darren Ramsay in the final 16 minutes to take the points.

Lichties manger Todd Lumsden was delighted with his side’s performance in the tricky conditions.

He said: “We seem to have had a lot of matches in very windy conditions lately, including this one, and once again it turned into a game of two halves.

“I thought our guys showed a lot of character and fortunately we came out on top. We always seem to do well in the second half of games, which shows our fitness levels are good.”

Berwick almost got off to a perfect start with Ross Drummond hitting the bar inside the opening minute. The Rangers striker tried his luck again in the 17th minute with a 20-yard drive that Allan Fleming could not hold, but the loose ball was scrambled clear.

The Lichties were struggling to make much headway as they battled against the driving wind and rain, their closest effort coming from a Linn free kick that sailed harmlessly over the top.

The visitors’ pressure paid off in the 28th minute when David Morris was tripped in the box and Blair Henderson sent Fleming the wrong way from the resultant penalty to put Berwick ahead.

Berwick enjoyed the bulk of possession but were unable to extend their advantage before the interval.

With the elements at their back, the Lichties looked to make a bright start to the second half. Chances were few and far between, however. Linn worked himself into a good position but fired tamely at Kevin Walker in the Rangers goal.

As the clock ticked on past the hour mark, Jamie Reid clipped another effort well off target for the Lichties.

A foul on Henderson at the edge of the box gave Berwick a chance but Euan McNeil’s free kick did not cause any concern. Steven Norman then shot wide.

The game was turned on its head, however, in a dramatic two-minute spell when the Lichties scored twice. Linn latched on to a long ball to coolly clip beyond Walker in the 74th minute. Wilson then sent a spectacular shot curling into the top corner from 30 yards.

Ramsay came close to adding a third two minutes from the end but Walker did well to beat away the winger’s shot.

The Arbroath man got on the scoresheet with the last kick of the game when he saw Walker off his line and lofted the ball in from all of 35 yards.