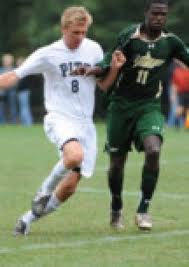 From the Arbroath Herald:  ARBROATH’S latest signing is looking forward to getting stuck in next season.

Joe Prince-Wright put pen to paper for the Lichties last week and says he can’t wait to get started.

Southhampton-born Joe (23) joins Arbroath from the United States where he has been studying, working and continuing his footballing career.

The midfielder recently graduated from the University of Pittsburgh with a double degree in English and Communications which he undertook while on a soccer scholarship.  Joe said: “It was a fully funded scholarship for four years and it was brilliant.

“The Panthers play in what is probably the best University League over there. Many players graduate to the MLS from Pittsburgh. “We used to play to crowds of six or seven thousand people. It’s probably the biggest league and has the best players.

“There are a lot of players now playing in the MLS and for national teams in the Caribbean and South America.”

This isn’t Joe’s first time in Arbroath either. He explained how he made the jump this year: “I just got in touch with Paul. In their last pre-season I was up for a week but things didn’t work out.

“I had a year left on my work visa for the US so I got a job working for the MLS in New York City, in Manhattan.  “I kept in touch with Paul while I was in the States and spoke to him in June and it just went from there. I’m delighted to be here.

“Last pre-season I played against Raith Rovers and a half against St Johnstone, but last night [Tuesday] was the first full game with Arbroath.

“It was a good test, Dundee United are a good side and it was a great pre-season exercise for fitness.

Arbroath manager Paul Sheerin believes Joe brings a new element to his squad. He said: “Joe is a different type of player. He’s more of an athlete and a ball winner.”

When he’s not playing football, Joe reports on it. He said: “I’m actually keeping up the journalism, that was part of the deal with coming back, I’ve got a column in the Guardian about the MLS.

“I’m also on talkSPORT at the weekend, so I’ll still be doing that and I’m actually looking to start writing about English and Scottish football for [a publication] back in the US. I’m putting out feelers for that.”

According to Joe he has even had help from legendary football correspondent Gabriel Marcotti who has been putting out feelers for him.

Meanwhile the boss is still hoping to make a few additions, but had this to say about another of his latest signings, Michael Travis.“He’s looking good, his fitness levels are good. He played against Cove and did really well.

“He’s been round and trained with a few clubs, but we were the first to offer him something and he was quite willing to commit and get on board with us. That speaks a lot for him and his attitude has been excellent.”