It's about consistency now 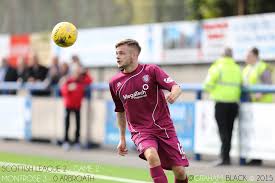 Super subs Kane Hester and Andy Ryan got the goals that ended Clyde’s four-game winning run but it was a good team performance which earned Arbroath the points.

Goalkeeper Allan Fleming and his defence limited Clyde’s openings and were supported by a midfield that darted forward to support the hard-working Greg Rutherford.

However, it looked like a point would be the only prize until Hester hit a fantastic shot with seven minutes left and then Ryan, who was listed as a trialist, outdid him with an even better effort a minute later.

Boss Todd Lumsden said: “The boys were terrific and it was two fantastic strikes that won the game for us.

“It is not just about the substitutes, even though they scored great goals, as everyone played their part.

“It is great to build on the win over Berwick in midweek but we have had a few knocks throughout the season so we will not be getting too high. It is all about consistency now.”

Clyde missed an early chance when Chris Smith headed over from a couple of yards before the best opening of the first half was created by Rutherford who beat three defenders but slipped his shot wide.

Rutherford missed a second chance early in the second half and Arbroath almost paid the penalty as Clyde’s David Marsh struck a post.

Lumsden made his double striking change with nine minutes left and it worked when Ryan had an effort blocked and Hester lashed the loose ball high into the net.

With Clyde still reeling, Ryan cut in from the right wing and curled a 25-yarder in off a post.

Arbroath are keen to sign Ryan during the transfer window and the striker said: “It was a great finish from Kane and my one was one of those strikes that will probably go over the bar the next 10 times I try it.”