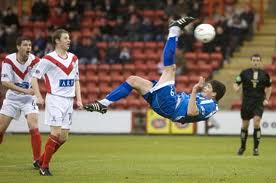 From the Arbroath Herald :  ARBROATH manager Paul Sheerin has made another signing with forward Derek Holmes agreeing to join the ranks at Gayfield.

The 33-year-old signed on the dotted line on Monday evening after spending last season with Airdrie United.

Holmes is a former team-mate of the manager and was part of the St Johnstone side that gained promotion to the SPL in 2009.

His other clubs include Raith Rovers, Ross County, Bournemouth, Carlisle United, Rotherham United and Queen of the South