Hardfought win in the wind

Arbroath got to grips with a well-organised Stenny after halftime.  A long teamtalk - which left our opponents out on the pitch for maybe 5 minutes - brought about an immediate improvement.   We started showing better movement and more grit, with Swankie and Doris finding space

But it looked like another frustrating afternoon - or worse - was on the cards, as we failed to convert a succession of good chances. Busch and Swankie first half, then Doris (off the bar), Ponti, Falky and several Swanks effort went close. At the other end Stenny carved out a few chances of their own

But it was as clear a penalty as you'll see as Doris ran through at pace onto an open goal.  The keeper denied him a clear goal opp so had to go and Doris kept his cool to fire in decisively.   We could have scored more afterward but the slender margin was enough 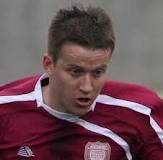 From the Sunday Mail:  PAUL SHEERIN heaped the praise on penalty king Steven Doris as the Arbroath striker netted his fourth spot-kick of the season to send his side joint top.

Doris netted from the spot in 84 minutes after he was hauled to the deck by Stenny keeper Chris McCluskey.

McCluskey also saw red for that challenge and Alistair Brown was easily beaten by Doris who has only missed one penalty in his entire career.

Sheerin said: "It was a clear penalty and I was always confident when Steven stepped up to take it. That's why he's our penalty taker, he's very confident.

"He's only ever missed one and is a very important player for us. We're now back on top with Cowdenbeath and there's a bit more of a gap to third place. Let's hope it can stay that way."

It was a hard fought win for Arbroath at a wind-swept Gayfield.

Arbroath had the first crack on goal in three minutes as Gavin Swankie made space for a 25-yard strike that was easily saved by keeper McCluskey.

Beau Busch then missed a golden chance to give the hosts the lead as he stole a yard off his marker to meet Kieran McAnespie's free-kick only to shoot wide from 10 yards.

At the other end, Stenny came close when Stewart Kean raced onto Stevie Murray's through ball before firing high over the top from 25 yards.

Arbroath did have the ball in the net on 15 minutes but striker Steven Doris had strayed offside before blasting home from 15 yards.

Kean came close to the opener in 30 minutes as he pounced on a Busch error to go one-on-one with Darren Hill but the keeper parried his low effort before blocking Willie Lyle's rebound.

The second half was far livelier and Doris set the tone when he cracked a thunderous 20-yarder off the crossbar.

Arbroath trialist Carlo Monti then missed a chance to win himself a deal when he failed to hit the target after he was sent clear by Josh Falkingham with Kean also missing a sitter.

It looked like being one of those days until a rash decision by McCluskey handed the Angus men the points.

Falkingham teased the visiting defence with a through ball to Doris and Stenny's McCluskey took the bait by launching in with a last man foul in 84 minutes.

The Stenny No.1 was shown red and Doris stepped up to fire beyond sub keeper Brown to seal the win.