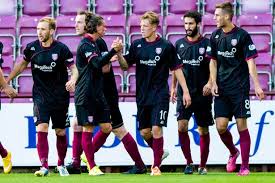 From the Edinburgh Evening News:  A ROUSING second-half performance, including three goals in four minutes, took Hearts past Arbroath and into the Scottish League Cup second round.

The League Two club led 1-0 at the interval and threatened to cause an almighty upset in Edinburgh before their Premiership hosts recovered after the break.

Jordan McGhee’s equaliser preceded two goals by Osman Sow – one a penalty – to quash the notion of an unexpected Arbroath victory. The visitors’ counter-attacking style worked well in the first half and earned them the opening goal, scored by former Hibs youngster David Gold. Hearts, doubtless with head coach Robbie Neilson’s stern words ringing in their ears, emerged for the second half with greater purpose and were 3-1 ahead shortly after the hour mark.

Arbroath substitute Martin Grehan headed home with six minutes to play to reduce the deficit. Then came an own goal in the dying seconds as Craig Wilson gifted Hearts a fourth.

The relief around Tynecastle at full-time was palpable. St Johnstone visit on Sunday as the Scottish Premiership gets underway and extra-time would have been the worst possible preparation for Neilson. He arranged this game three days before Hearts’ first league fixture to avoid a run of midweek matches at the start of next month. The decision raised some eyebrows.

Arbroath were delayed arriving in Gorgie due to an accident on the M90. They entered the stadium around an hour before kick-off and managed a pre-match warm-up before kick-off on a mild summer’s evening. Manager Todd Lumsden had only just returned from holiday and hoped to brush off a 4-1 defeat by Dunfermline in the Petrofac Training Cup at the weekend.

He would have enjoyed the open start to proceedings. Arbroath managed the game’s first shot when Sergio Cecilia Alvarez forced Jack Hamilton down to his right. The good-natured band of travelling fans instantly reacted with a chant of “Oh, Cecilia” in honour of their club’s recent Spanish signing. Efforts by Kevin McHattie and Nicholson were blocked as Hearts ventured forward before Jamie Clarke, the visiting midfielder, sent an attempt over the crossbar at the other end.

Neilson had left players like Jamie Walker, Neil Alexander and Blazej Augustyn out of his side. Those selected saw plenty of the ball as the half-hour mark approached but weren’t troubling their part-time guests enough.

Hearts were surrendering possession all too easily in the opposition half and paid the price five minutes from the interval.

Arbroath mounted an attack down the right and Alvarez found space for an incisive through ball to Gold. The midfielder dispatched a well-executed shot into the corner of Hamilton’s net from 12 yards and set off to celebrate a surprise scoreline. The 229 away fans certainly enjoyed the moment.

Hearts looked more than a little stunned and tried to level quickly. Paterson headed King’s corner off the bar and Ozturk’s follow-up effort was blocked by defender Ricky Little. Fleming then showed fine reactions to push a low drive from Sow to safety just before the half-time whistle.

The second half began with Hearts displaying far greater urgency and purpose in their play. They saw another effort disallowed for offside, this time it was Sow left shaking his head. Then came a glaring chance for Arbroath to double their advantage. Bobby Linn, the visitors’ best player, hoisted a free-kick forward and both Ozturk and McGhee went for the high ball. Neither cleared and it bounced for the unmarked Lewis Coult to volley, however, he was marginally off target.

Hearts punished Coult’s profligacy in ruthless fashion by scoring three times inside four minutes. First, a sustained attack ended when Ozturk and McGhee redeemed themselves for their error moments earlier to produce the equaliser. The Turk crossed from the left for McGhee to slide in and convert a straightforward, but nonetheless vital, leveller. Moments later, another cross from a similar position by Nicholson allowed Sow to put Hearts ahead. Then came the Swede’s penalty to make it 3-1 after Nicholson was tripped inside the box by Craig Wilson.

Arbroath weren’t quite willing to retreat and accept their fate, though. Linn lashed a 25-yard free-kick which Hamilton pushed on to the post, only for Gold to send the rebound over the crossbar with the goalkeeper still grounded.

The deficit was reduced to one six minutes from the end as substitute Grehan headed Jordan Lowdon’s cross home at the back post. That reiterated some defensive frailites which will concern Neilson ahead of the league campaign. For now, he will accept progress from a tie which was considerably more difficult than many expected.

The win was confirmed in stoppage time when Wilson inadvertently slid Nicholson’s through ball past Fleming for an own goal. That finally completed the scoring in one of the most open and entertaining matches to start any season.