Edged out by confident Shire 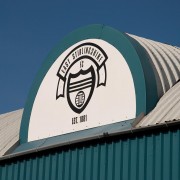 Shire ended March in the same way they started the month by beating Arbroath 1-0. Unlike their victory at Gayfield Park, this was more comprehensive and Shire could have won by more than one goal. The only goal came in the 25th minute from Kevin Nisbet’s wonder strike. Nisbet had a couple of other chances one-on-one, but Shire will be happy that Arbroath never created a great goal-scoring chance. The victory means Shire have taken thirteen out of a possible eighteen points from March, and it is this form that has seen them reclaim 5th place.

Craig Tully made just one change from the Annan Athletic defeat, with Ross Gilmour replacing Max Wright and changing to a 3-5-2 formation.

Neither side settled in the early stages, with the swirling winds playing a key role, but early on there was a sign of the quality of Shire’s defensive performance. Craig Johstone’s deep left-wing cross looked like it had picked out Paul McManus in a dangerous position, but there was David Bates to make a superb clearance. The wind looked like it had come to Arbroath’s assistance when it caused Richie Barnard to spill Bobby Linn’s cross, but the Shire keeper reacted quickly to keep the ball away from the waiting McManus, and Connor Greene cleared.

Shire were passing with confidence, and slowly they started to create great chances. Neil McCabe’s right-wing cross was headed onwards by both Arbroath centre-backs towards David McKenna, who took his time and his shot was tipped over by their keeper Marc McCallum.

Arbroath finally had a shot in the 23rd minute, and it came from a free-kick 35 yards from goal. Linn launched the ball into the box where Kevin Buchan’s flicked header just went wide of the far post.

And then the home side took the lead, and it was a special strike. Kevin Nisbet took the ball past Ricky Little, but the ball took a deflection off the defender that set the ball up perfectly and Nisbet took up the invitation with his shot dipping into the top-right corner, giving McCallum no chance.

It was nearly 2-0 moments later, when Luke Donnelly played Lloyd Kinnaird to the byline, and his cross took a heavy deflection of an Arbroath defender, but straight into McCallum’s arms. Later, David Greenhill’s driven corner found Connor Greene, whose header hit the crossbar and bounced over.

Shire were on top and playing with confidence. McKenna sent Kinnaird through down the left-wing and he cut into the box before his left-footed shot just went wide of the right post, leaving the full-back still looking for his first Shire goal. Then Greenhill had shot from 25 yards that McCallum saved.

Arbroath had a strong end to the first half, from when they won a free-kick, 35 yards from goal. Bobby Linn curled the ball around the three-man wall but straight into the grateful arms of Barnard. And then from Jordan Lowdon’s corner, Kieran Stewart’s header was cleared off the line by Ross Gilmour. And then when Johnstone broke into the box, he went down under the challenge of Gilmour but the referee decided it was a good challenge.

Arbroath started the second half strongly when David Bates gave the ball straight to Stewart who ran towards the edge of the box, but he shot straight at Barnard.

But Shire still posed threats. Donnelly set Nisbet through on a one-on-one, but his shot was saved by McCallum, and Kinnaird nearly reacted quickly to get the rebound, before the keeper held the ball.

The Red Lichties’ were playing stronger in the second half, with Liam Rowan beating Kinnaird before shooting straight at Barnard.Then Stewart’s right-wing cross picked out Linn, but his flicked header went wide of the far post.

Once again, Donnelly sent Nisbet through on a one-on-one, but this time McCallum saved brilliantly with his legs.

Arbroath came close when Stewart shot into the side-netting, and then from a corner Ricky Little headed wide.

Scott McBride’s mishit pass-back under no pressure nearly cost Arbroath, as Greenhill’s corner picked out McKenna whose header was only kept out by a magnificent McCallum save.

Arbroath had another penalty shout late on when Simon Murray broke into the box and went down under pressure from Neil McCabe, but once again the referee decided there was no foul.