Detention for the team? 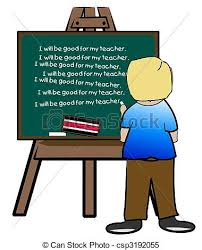 From the Courier:  Dougie Anderson said the battling qualities shown by his East Fife side in their 2-0 win over Arbroath prove they have the heart for a promotion scrap.

The victory ensured they stay in the final play-off spot after goals from Derek Riordan and Caolan McAleer wrapped up the victory.

The three points stopped a rot of two consecutive defeats as the Methil men look to get their promotion ambitions back on track.

Fife assistant Anderson said: “It was a tight game but the guys dug in really deep and showed a lot of desire. We’ve played better but showed our heart by putting our bodies on the line.”

East Fife started well and pestered the Arbroath goal early on.Allan Walker’s header cleared the bar by just a couple of inches as the home side threatened.

The Fifers were gifted a great chance to open the scoring when Arbroath keeper Marc McCallum pulled down Ross Brown six yards from goal.  The keeper saw yellow for his foul but made amends by saving Riordan’s penalty kick.

Arbroath were the architects of their own downfall and again presented the Fifers with a great chance to open the scoring when Kevin Nicoll brought down Brown on the edge of the box.

This time, though, Riordan made no mistake and sent his free-kick past McCallum.

The Fifers had bossed the first half but, to their credit, Arbroath started the second a lot brighter. Mark Whatley shot straight at Jordan Millar from six yards out before sending a strike high over the bar.

They were made to pay for the misses as the game neared its end.

Former Arbroath man Alan Cook worked room for himself at the corner flag and send a pinpoint cross across goal which McAleer got on the end of and sent past McCallum.

Arbroath boss Allan Moore kept his side in the dressing room for 45 minutes after the game as he looked for answers to his side’s stuttering form since the turn of the year.

His assistant Todd Lumsden said: “We could have won a game of football on the chances we created.”