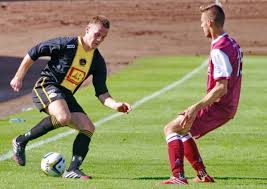 From the Berwick fans forum:  Berwick lined up for their clash with Arbroath unchanged from the side which suffered a 4-1 defeat against Kilmarnock, owing to a late onslaught from the Premiership side.

And player-boss Colin Cameron would perhaps be left rueing tired legs once more after his side conceeded a 2 goal league to allow Arbroath to steal a point from Shielfield.

Darren Lavery opened the scoring with a header

In front of a bumper crowd of 721, owing to the Supporters Trust’s sponsorship of the game, the ‘Gers got off to a flying start with both Darren Lavery and Michael McKenna registering on the scoresheet in the first twenty minutes of the match.

However Andy Ryan pulled one back for Arbroath just minutes after Berwick’s second, allowing them to stay in the game until the latter stages, at which point Darren Ramsey took advantage of a loose ball to smash an equaliser.

It took the ‘Gers just three minutes to open the scoring, McKenna winning the corner he’d deliver an assist from, whipping a lovely cross into Lavery who rose well to break the deadlock.

Just over ten minutes later it was 2-0, Blair Henderson winning the ball on Berwick’s right before storming forward, dodging a challenge and cutting back across the edge of the 18 yard box for McKenna, who showed great composure to wriggle past three Arbroath defenders and slot it into the bottom left.

The all-action start continued when the ‘Gers switched off at the back, allowing Ryan to sneak in and rifle a strike past Kevin Walker.

Arbroath thought they’d equalised when, after 25 minutes, Martin Grehan latched on to a deep cross and smashed past Walker, only to be given offside by the standside linesman.

This gave the ‘Gers defence an awakening and the whole side appeared to tighten things up, with Arbroath pleased the game remained in-sight, allowing them the chance to regroup at half-time.

But it was the ‘Gers who had the best chance of the early second-half exchanges, Ewan McNeil’s free kick from around 45 yards cannoning off the crossbar.

But in comparison to the excitement of the first half, the second lacked any real penetration with the ‘Gers failing to break down the Arbroath wall, and the Smokies perhaps preparing to hit the ‘Gers late on to take advantage of any tired legs.

And fitness soon started to show, with the 42 year old Cameron forced off after appearing to pull his hamstring. His replacement David Banjo sufered the same fate shortly after arriving, and was replaced by David Morris.

Morris had a great chance to kill the game off for the ‘Gers but perhaps fell guilty to not being greedy enough as he failed to pull the trigger.

And as the ‘Gers retreated further into their own half, Arbroath were given reward for a battling, though not entirely pretty performance when Grehan nodded down into Ramsey’s path, the midfielder latching on to the knock-down and thundering home a half-volley past a helpless Walker.

The ‘Gers will probably see this as two points lost rather than one gained, but with the defence’s midfield protection forced off twice in quick succession, it was perhaps unsurprising that Arbroath took a point. Positives can be found however, with the ‘Gers continuing to look dangerous going forward, and an unbeaten home record remaining in tact.