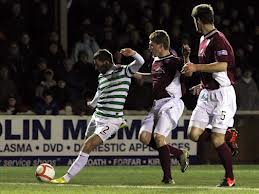 Arbroath's Scottish Cup adventure is at an end but what a thrilling rollercoaster ride it has been.

The Second Division side have gone toe to toe with the mighty Celtic for 180 minutes of lung-bursting action and although they have exited the competition, the plucky part-timers can do so with heads held high.

Courier columnist Christian Dailly had predicted on Wednesday that with the Glasgow giants able to put Europe on the back burner for the next few months, they would power through their domestic chores but that didn't happen last night.

Sheerin made two changes from the side that drew 2-2 with Stenhousemuir at the weekend, Lee Sibanda and Paul Currie coming in for Derek Holmes and Connor Birse.

Lennon made three alterations from the team that beat Kilmarnock on Saturday, Michael Lustig, Beram Kayal and Georgious Samaras replacing Gary Hooper and Victor Wanyama, who dropped to the bench with Joe Ledley missing out altogether.

The match beat the big freeze thanks to the protective covers Arbroath bought, ironically, with part of the proceeds from their Scottish Cup tie with Rangers at the start of the year.

It was a frenetic opening to the game with both sides determined to attack and Celtic having an outstanding chance to open the scoring when Kayal flighted a cross from the right but Samaras directed his header straight at Scott Morrison with the goal at his mercy.

Shortly after, Charlie Mulgrew set up to hit a deep corner but instead he pulled the ball back to the unmarked Matthews who shot wildly over from 20 yards.

Despite the Celtic ascendancy, the Arbroath fans were in fine voice, not missing a chance to have a go at their Angus neighbours, chanting: ''Are You Montrose in disguise?'' at the Hoops.

Those words seemed to come back to haunt them as Samaras played in Lassad with the Tunisian steering the ball into the back of the net but the goal was chalked off as he had scored from an offside position.

However, there was no doubting the legality of the Hoops' opener in the 18th minute.

Shortly before, Arbroath had been denied when a goalbound Sheerin shot was headed clear by Kelvin Wilson.

Celtic went back downfield and Matthews played a one-two with Samaras before cracking a great shot from the edge of the box past Morrison and into the back of the net.

It was a bitter blow to Arbroath who undoubtedly would have been looking to frustrate the defending SPL champions until at least the half-hour mark.

Having established that lead, though, Celtic looked in no great hurry to extend it, preferring to soak up all that Arbroath could throw and them and look to hit the Red Lichties on the break.

Brian Kerr became the first player to be booked in the 41st minute, after a confrontation with Kelvin Wilson.

However, he and the rest of the Arbroath players would have been relieved to have headed down the tunnel at half-time just one goal in arrears.

Just four minutes after the restart, Mulgrew was booked for a trip. Arbroath's Stuart Malcolm had a great chance to equalise from the free-kick but with Celtic keeper Fraser Forster under pressure, referee Craig Charleston blew for a foul on the stopper.

It was Celtic's turn next when a deep Mulgrew free-kick from the left was only half cleared to Lassad loitering on the edge of the Arbroath box but he pulled his shot wide.

Crucially, though, from the home point of view, the Hoops were still only one goal ahead and there was plenty of hope that their side could yet pull off another shock.

In fact, Celtic's frustration at being unable to extend their lead was apparent with Lennon cutting an irate figure in the dug-out.

His anger increased shortly after the hour mark when Emilio Izaguirre had to come to the rescue with a crucial header and then Arbroath had what they thought was a perfectly good goal chalked off for a foul.

Lennon showed what he thought of the situation by throwing on the big guns in the shape of Victor Wanyama and Gary Hooper.

However, it was Arbroath who continued to look dangerous with Lee Sibanda breaking well but his shot was easily saved by Forster.

Sheerin's side really had the bit between their teeth and they were awarded a free-kick in a dangerous central position 22 yards out but this time Steven Doris could not repeat his feat from Celtic Park two Saturdays ago and shot over.

Arbroath then had arguably their best chance of the match in the 78th minute when sub Connor Birse burst free down the left but his shot was superbly saved by Forster.

It was shaping up to be a nerve-racking last 10 minutes for both sides, especially for Celtic who were relieved to see a wicked Paul Currie shot fly just wide in the 84th minute.

Hoops nerves were really jangling as the Red Lichties continued to press for the equaliser. Even when Celtic did venture into the Arbroath half in extra-time, they paid the Angus side the ultimate tribute by trying to run down the clock instead of flighting it into the box.

Paul Sheerin said: ''I'm frustrated. I have been told it was a goal and not a foul but I haven't seen it.

''The boys have been magnificent over the two ties and what I hope now is that they can take that into the league and show a bit of consistency.

''Hopefully, this will give us a bit of belief. I felt we would have a chance and Forster does what he has done all season and made a great save. Young Connor is in there beating himself up but it was a good save.''

Hoops boss Neil Lennon said: ''The pitch was a bit like an ice rink and passes were going away from people, so it became a bit of an effort but we are glad to go through in the end.

''It was a difficult night but overall we are still in all the competitions going into the New Year and we can't ask for better than that.''