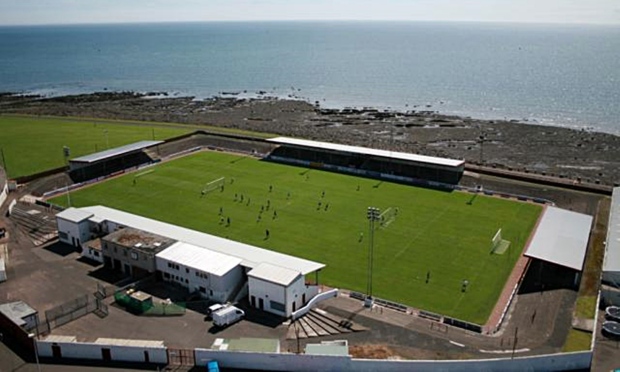 Environmental campaigners think so and have warned that climate change could lead to a switch in sports for Arbroath FC.

Members of the Green Party were at Gayfield to unfurl a banner of foreboding, which warned of climate chaos and sea levels that would inundate the home of the Red Lichties.

Party member David Mumford said: “The aim of the exercise is to show people visually what’s likely to happen unless we do something about climate change.”

No other ground in Europe is as close to the sea as Gayfield Park and it is not unusual for a bitter North Sea gale to lift a spewing wave over the east terrace.

Mr Mumford added: “It’s not too late yet but it very nearly is.”

Despite the prophecy of doom, according to Dr Sue Dawson, senior lecturer at Dundee University’s school of environment, the science suggests a rather more benign future for the home of the men in maroon.

Dr Dawson is lead author on a national coastal flooding document for Scotland and said the likely rise in sea level for the next century or so is 5-70cm.

She said: “Based on the science, the UK climate protections project (UKCIP) allows us to examine the potential rise in sea level across the UK. For the east coast of Scotland, even at the extreme range, the increase over the 21st century is in the order of 53cm but a likely range from 5-70cm.”

When adjustments are made in relation to weight and release of ice after the last Scottish ice sheet, the science suggests the east of Scotland might expect sea level rises of 30-40cm up to 2095.

Scotland’s longest-serving football chairman, Arbroath’s John Christison, doubted whether he, or any of the club’s supporters, players and stalwarts had any immediate cause for concern.

He said: “We can all see that Angus Council acts upon coastal erosion, with the work that has been going on near to the club to strengthen the sea wall defences but Gayfield is in no immediate danger and we have no plans at present to move.

“Who knows, perhaps in the future club officials will have to make sure every employee has their swimming certificate.”