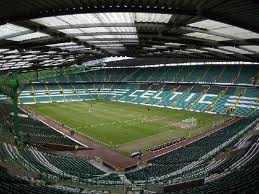 From Scotland on Sunday:

Gayfield of dreams for Arbroath

SO REGULARLY are the shocks cascading down upon one another in outcomes at Celtic Park these days, no result from that arena should be able to cause the eyes to widen any more.

Yet, even if it was only a replay they earned, what Arbroath, mid-table in the Second Division, pulled off today knocks the recent Parkhead victories of Inverness Caledonian Thistle and Kilmarnock into a cocked hat, even allowing for the fact that Celtic manager Neil Lennon, who cut a decidedly unperturbed figure post-match, fielded a shadow side ahead of Wednesday’s Champions League decider at home to Spartak Moscow.

Indeed, for visiting manager Paul Sheerin, this result, which will earn his team a replay at Gayfield a week on Wednesday, eclipsed one of

Scottish football’s most fabled cup occasions. Sheerin scored a penalty for Inverness with their “Super Caley” Scottish Cup success that did for Celtic manager John Barnes in February 2000.

“This probably outweighs what we did then,” said Sheerin. “Inverness were a full-time club and for us to come as a part-time club, training only four hours a week, and compete with the Scottish champions is up there with the best from my point of view.”

victory that just happened to come against Barcelona. They have only one win from their previous five domestic encounters. Sheerin’s side succeeded where the Catalan behemoths failed because they adopted the Celtic template for that success. They sat in and conceded acres of possession. They had a keeper in outstanding form, Scott Morrison twice denying Miku and thwarting Lassad at the end. And they kept going valiantly with a draw earned courtesy of an 87th-minute equaliser from Paul Doris.

Granted, the Angus side may have ridden their luck and enjoyed good fortune with their goal coming from a free-kick that took a wicked deflection off a member of a Celtic wall that broke for cover – the main source of annoyance for Lennon, who said he learned that he “can’t have a couple of people in the wall because they seem to want to jump out of the way”. “If they stand their ground the deflection doesn’t happen,” he said.

Equally though, Arbroath had to overcome a hellish break with Celtic’s claiming a 33rd-minute lead with a bonkers own goal. It resulted from Stewart Malcolm looking to shepherd the ball over the byline, panicking when that didn’t happen, and attempting a blooter upfield that cannoned off the backside of fellow defender Alex Keddie to beat Morrison from four yards.

At that point, the thousand or so visiting supporters were forced to break off from their teasing of the home fans over the fact the Arbroath faithful must have represented about a 13th of another lowly Celtic Park cup crowd.

By the close of it, they were in full partying mode – as were their players in immediately setting off for their Christmas night out in Newcastle. Morrison, on babysitting duties, wasn’t able to travel south for it following his “once-in-a-lifetime” experience of playing in the east of Glasgow and, as a result of the own goal, “Celtic not scoring against me”.

The real intrigue of the afternoon was supposed to surround what happened before kick-off when Lennon officially disclosed his starting line-up. That act revealed that he was intent on playing it just about as safe as he possibly could before a midweek encounter on which hopes of a place in the Champions League last 16 will rest. In all there were nine changes from the team which trounced Hearts at Tynecastle. Moreover, one of those who retained his place was Victor Wanyama, who is suspended for midweek.

Chances are that only captain Scott Brown of those selected to face Arbroath will make the cut for the visit of Spartak Moscow; his appearance dependent on a hip condition Lennon said afterwards had stood up to stood up to a 64-minute test.

The otherwise Understudies XI, which provided first starts for

Nigerian playmaker Ibrahim Rabiu and Joe Chalmers, huffed and puffed and required the Second Division side to blow their own house down.