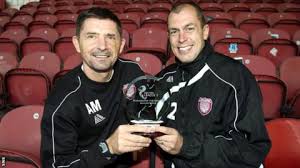 Arbroath are on the hunt for a new boss after they “parted company” with Todd Lumsden.

The Angus men lost 1-0 to Stirling Albion at Forthbank yesterday and sit third-bottom of League Two.

In a statement, the Lichties said: “After a disappointing run of results and a poor league position, Arbroath FC have parted company with manager Todd Lumsden and his assistant Steven Hislop.

“The club would like to publicly thank them for their efforts since taking over towards the end of last season and wish them both well for the future.

“The club will now actively seek a new management team.”