Supporters of two Scottish Division 2 clubs put aside their differences ahead of their vital clash at New Bayview, Methil on Saturday 21st March.   Both East Fife and Arbroath fans will be gathering signatures for petitions to reinstate the Thornton-Leven rail-link as part of the LevenMouth Rail Campaign (LMRC).

Though 40 miles apart, the clubs share a long rivalry and often play in the same division.  Yet while Arbroath has a station on the main east coast line, neither sets of supporters can travel by rail.  East Fife is the only team in the lowest tier without a station or rail service.

That is despite the fact that Network Rail owns and manages the 5 miles of track between Leven and Thornton last used for freight a decade ago and currently mothballed.

Lifelong Lichtie fan Allen Armstrong explained he used to travel by train to see Arbroath away games at old Bayview before the line closed in 1969.  "Since then, a complicated bus journey using 3 buses, or an inconvenient car trip for either set of supporters  provide the only unsatisfactory means to get to our opponent's  ground".

Leading East Fife supporter Eugene Clark stated  "it remains a national disgrace that the Levenmouth conurbation has no direct rail link.  The Rail Campaign has been active this past year and a new feasibility study will commence in April 2015 funded to the tune of £100,000 by Fife Council.   Getting public backing from the fans and rail services back to Leven is more important than any single game".  A reopened Leven railway station would be sited a mere 200 metres from New Bayview.

Levenmouth, comprising Methil, Leven, Buckhaven and other adjoining villages is by far the largest urban area in Scotland without direct rail services.  Its population is significantly larger (37,000) than the 25,000 residents of Arbroath.  The rail link was not a victim of the Beeching cuts since Beeching's Report recommended this service remain but it closed due mainly to apathy.

With a new rail revolution gathering steam in Scotland and new lines reopening elsewhere, often boasting a weaker case. , it is high time that fans of rivals East Fife and Arbroath can travel by train to their away games 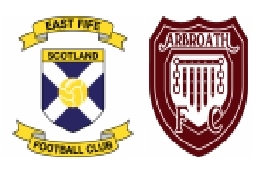