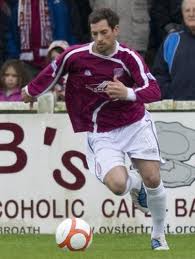 Jim W**k*r has already splashed the cash in making 9 signings but is still `targeting a wide man benfore he completes the trasnfer business.  it would be a long shot

Apart from the fact that using Gav as a wide player (to replace Byers?) would be a waste of his talent, W****r and the Brechin board seem ruthless and without much in the way of scruples.

We'd happily forgotten about W****r's undignified jump for cash this time last season - leaving us relegated and with only 3 signed players.  Our Board was angered by the unprincipled manager and fans even by Brechin's approach.   Three former Lichties features in City's sqaud this past season

He clearly does not give a damn about keeping good local relations and has money to spend.   So far, despite displaying some capacity as a manager, he's only been a loser but Brechin seem determined to lead the spending and try and ensure a better outcome.

Advice to Gavin - we'd love you to stay and I think your career could thrive on what you;ve achieved this year, If you leave anyone but Brechin on grounds of principle and preferably, for a Div1 team