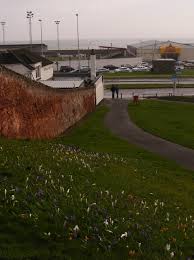 Stuart McLaren’s men earned a good away point on a cold, wet and windy afternoon at Gayfield to stay just behind Arbroath in the Ladbrokes League 2 table.

All four of Saturday’s matches ended in draws and we are five points outside the play-offs as we prepare for a home double header against Montrose (Tuesday) and Berwick Rangers (Saturday).

Darren Smith scored our equaliser after 76 minutes, shortly after the Red Lichties had gone ahead through substitute Kane Hester. In testing conditions overhead conditions, and on a heavy pitch, both teams had opportunities to win it as we drew our second match in a row, following the recent stalemate with Queen’s Park.

Albion were without Willie Robertson, Kevin McKinlay, Ross McGeachie and Craig Beattie but there was a debut for on-loan St Mirren midfielder Lewis McLear, who showed up well and was unlucky to see his first-half free-kick strike the top of the bar.

Fellow recent signing Scot Buist made his second ‘debut’ for the club while Ross McMillan returned as a late substitute after three months out with a hamstring injury and there was a first appearance for U20 winger Moses Olanrewaju, who looked lively when introduced in the second half.

We had the ball in the net early on but Darren Smith was flagged offside as he tucked away the rebound after keeper Allan Fleming had pushed out a low drive from Mark Lamont but chances were few in a tight first half that saw the Red Lichties lose Bobby Linn to injury after half an hour.

Arbroath looked the more likely team to break the deadlock in the second half but ex-Alloa striker Greg Rutherford missed a great chance from close range and Chris Smith made a fine save to keep out a header.

With 20 minutes left, a free-kick was launched into the Stirling box and was flicked on to Hester, who diverted it into the net with his first touch.

This had the feel of a game where the first goal could be decisive but, just after Todd Lumsden’s men had been denied a second by the offside flag, we equalised.

Sean Dickson picked out Steven Doris on the right and his loss cross was swept high into the net by Darren Smith for his fifth goal of the season.

In the closing minutes, Smith made a superb save from Jamie Reid’s long-range effort then we almost won it when Doris got clear but Fleming was out quickly to block.