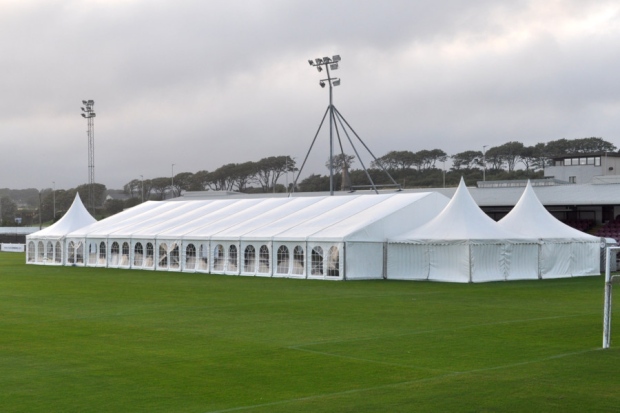 A Gala Dinner held in the unique venue of a marquee on the pitch at Gayfield has been hailed a fantastic success by the club chairman.

John Christison, the longest-serving chairman in Scotland, told the Herald: “It was a fantastic evening which went extremely well and marked an important part of the club’s history. Everything was superb.”

A specially-erected marquee tent at Gayfield Park housed a huge turnout for an evening of celebration over the anniversary of the famous match in 1885 when The Lichties defeated Aberdeen Bon Accord by the world record margin of 36 goals to nil. On Friday, September 11, the many guests enjoyed a meal followed by entertainment.

Mr Christison continued: “The marquee added to the atmosphere on the night. It really was a unique event as 130 years is an incredible length of time to hold a world record.”

To commemorate that record the club commissioned and designed a limited edition of 36 Caithness Glass bowls and numbers 36 and 13 (the record total of goals by John Beattie in the match) were auctioned on the night, along with a dress donated by Lorraine Kelly and special 36-0 bottles of Arbikie gin and vodka. Mr Christison described the auction as a “significant boost” to club funds.

He continued: “Former Scotland international Murdo McLeod was master of ceremonies and Ian Wishart did a history of the 36-0 game. Dave Ramsay introduced the inductees to the club’s “Hall of Fame”; Ned Doig, Albert Henderson and Tom Cargill. With Albert no longer with us, it was great to see his daughter Carol accept the honour on his behalf.”

After expressing his hopes of a victory for the current side during his speech last Friday, Mr Christison described the 1-0 away win at East Fife the next day as “the icing on the cake”.

For those unable to attend the event, there is still a chance to commemorate the anniversary with a special Caithness Glass paperweight. In addition, some remaining limited edition Caithness Glass bowls are available from the club at a purchase price of £100.